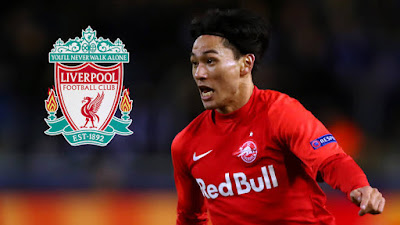 Liverpool have been in discussions with Red Bull Salzburg over a £7.25m January deal for Takumi Minamino since November, catching their rivals for his signature cold.

Manchester United were one of the clubs scouting the Japan international as an alternative to Leicester’s James Maddison, while Bundesliga leaders Borussia Monchengladbach tried to make a late push for the attacking midfielder.

The latter’s manager, Marco Rose, had coached Minamino during his spell at Salzburg.

As The Independent has revealed, the strong relationship between Liverpool and the Austrian club gave the European champions a huge advantage in the pursuit of the 24-year-old, whom they are due to announce in the winter window pending a medical and sealing personal terms.


Michael Edwards, sporting director of the Premier League’s pacesetters, was aware of the player’s clause for a lengthy period while United were not.

He has spent a considerable amount of time working with Salzburg on inspiration for Liverpool’s new £50m training complex and has great rapport with Christoph Freund, his counterpart at the Austrian champions.

While all the headlines and hype has surrounded Erling Haaland, it is Minamino and Hwang Hee-chan that have most interested England’s top sides.

How RB Salzburg scouted the perfect Liverpool player in Minamino

Liverpool have monitored both, watching the former since 2013 but his development over the last two years has really peaked the interest of Jürgen Klopp.

Minamino, who has netted five goals in the last four World Cup qualifiers and has been luminary for Salzburg in Europe, could easily have fetched over £25m without his release clause.

The deal will represent another example of Liverpool’s stellar recruitment work in terms of their forward-thinking. Minamino’s cost mirrors the fees Ryan Kent and Rafael Camacho were sold to Rangers and Sporting Lisbon respectively.