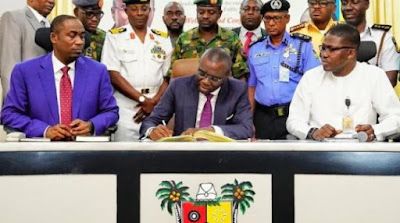 The Lagos State Government has said it will on Wednesday open bid for firms that showed interest in the construction of the Fourth Mainland Bridge.

The state Commissioner for Information and Strategy, Gbenga Omotoso, stated this while addressing the press as part of activities lined up to mark Governor Babajide Sanwo-Olu’s 200 days in office.

Omotoso, who said local and international firms expressed interest in the construction of the bridge, said the bidding would be done at a ceremony to be hosted by the state government.

The commissioner added that the Sanwo-Olu administration had put a special focus on infrastructure, traffic management and transportation to reduce gridlock.


He said, “I boldly state here that the THEMES agenda of the Sanwo-Olu government is on course and will be achieved. The speed of projects implementation has now increased, especially since the last 100 days.

“The government is leveraging the private sector, which controls about 80 per cent of the state’s Gross Domestic Product, as crucial in the government’s drive to bridging the infrastructure gap and building the smart city of our dream.

“Access Bank is partnering the state government in the upgrading of a network of roads in Oniru under PIIP arrangement. To further bring relief to our people, we will be setting the process in place for the construction of the Fourth Mainland Bridge. Next Wednesday is the final day for the submission of expression of interest; we will be unveiling the process that will lead to the realisation of the project on that day.”

Speaking on Sanwo-Olu’s 200 days in office, Omotoso said the governor had kept his electoral promises despite challenges.