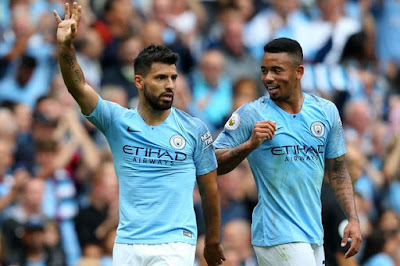 Gabriel Jesus ended his eight-match goal drought with a brace in Manchester City’s 4-1 victory over Burnley on Tuesday and hopes this can spark him into emulating team-mate Sergio Aguero’s scoring rate.

The 22-year-old Brazilian has got his chance to lead the Man City line and will do so again in the Manchester derby on Saturday because record goalscorer Aguero is injured.

Jesus — bought for a reported £27 million ($35 million) from Palmeiras in the January transfer window in 2017 — said he is confident in his abilities as a goal scorer but just needs to follow 31-year-old Aguero’s example.

Aguero, who is out with a thigh injury, has scored nine goals in 12 Premier League appearances this season and 173 in 251 league games overall for City at a rate of 0.69 per match.

“I know my qualities — I know I can score,” Jesus said after the match.


“I have to score when I play.

“Sergio scores every time. That is my ambition.

“I want to play and score every time.”

Jesus said the victory was also a confidence booster for the defending champions after an indifferent run which brought one victory in five games in all competitions prior to the Burnley clash.

City reduced the deficit between themselves and leaders Liverpool to eight points, although it can go back to 11 if the Champions League holders beat city rivals Everton later on Wednesday.

“It is confidence (booster) for us. This time the Premier League is so difficult,” he said.

“Liverpool are now eight points in front of us. We have to play all the matches like a final to win.”