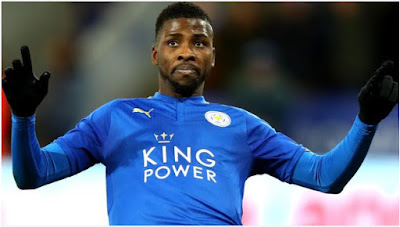 Kelechi Iheanacho struck a dramatic stoppage-time winner following a VAR intervention as Leicester City moved up to second place with a 2-1 win over troubled Everton at the King Power Stadium.

Just incase you missed it


The Foxes forward made a huge contribution from the bench as he set up Jamie Vardy’s equaliser on 68 minutes before firing in a superb last-gasp drive that was initially ruled out for offside.

The visitors led at the interval courtesy of Richarlison’s bullet header and had survived a scare when VAR overturned a penalty award for Mason Holgate’s challenge on Ben Chilwell.

The result means Brendan Rodgers’ side made it six league wins on the spin for the first time since 1963 and are now eight points off top spot, and three ahead of Manchester City.


Everton changed system to three at the back and it worked for much of the contest, but the heartbreaking defeat means the Toffees remain 17th, just two points off the drop zone.

Leicester will now look to continue their winning run when they host rock-bottom Watford on Wednesday while Everton face a major test at Liverpool in the Merseyside derby.

Leicester’s bid to confirm the murmurs that they could sneak their way into becoming Liverpool’s main title rivals were enhanced here, with the type of belief and togetherness that was reminiscent of the ingredients that saw them crowned shock champions back in 2016. However, it was a very tough one for Everton to take. Marco Silva is clinging on to his job, but a win at the home of the Foxes would have given him some respite. It’s looking bleak for the Blues boss after a seventh defeat in 10 outings and next up is a trip to the red side of Merseyside, where the Toffees haven’t won since 1999. If Silva is still in place to take charge at Anfield, he’ll need something special to realistically keep his job going forward.

Kelechi Iheanacho made a stunning impact from the bench with a goal and an assist. His introduction sparked the whole of the home side into life and completely changed the complexion of the contest.