If we don’t end Almajiri now, it will come back to bite us -National Security Adviser, Monguno 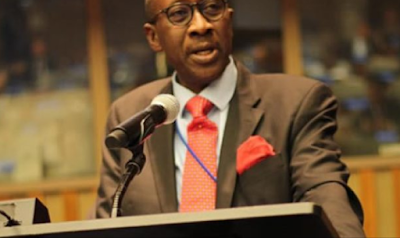 Babagana Monguno, national security adviser (NSA), says the government cannot afford to keep extending the phasing out of the Almajiri system of education in Nigeria.

Speaking at the launch of the revised national security strategy for 2019 on Wednesday, Monguno said if the system is allowed to persist, “it will come back to bite us big time”.

The national security strategy was launched in 2014 and it is reviewed every five years.

In June, Monguno said the federal government was considering proscribing the system to ensure that no child is deprived of basic education.


“The issue of illiteracy is directly linked to the issue of children not going to school, this Almajiri phenomenon which we have been talking about, we cannot continue to push it under the carpet because what? Eventually, it will come back to bite us in the butt big time, we need to deal with this issue and it is the responsibility of all of us to try and take care of this issue without any inhibition,” the NSA said.

He also said insecurity in the country is tied to international influence, adding that both internal and external factors have combined to result in “a complex constellation of threat and risk to all of us”.

He said the revised strategy is designed to tackle the root causes of insecurity, education and healthcare challenges.

“The issue of insurgency in the northeast is directly linked to the issue of terrorism in the Sahel which is an increasingly volatile neighbourhood and the situation is also derived from what is happening in Libya which in turn is affected by the lack of security Syria which derived its own situation ultimately from Iraq,” he said.

“Now when we look at the issue of farmers and pastoralists perpetual conflict, it is also linked to the influx of armed groups and the proliferation of small arms and light weapons across porous borders. In our own case, we are talking of some 4,040 kilometers of land borders. Again, when you look at the upsurge in armed banditry, it is part of the sphere of transnational organised crime which is affecting us. And looking at the Niger delta situation, basically, the activities of criminal gangs in the Niger Delta are equally linked to pipeline vandalism, oil theft, piracy and sea robbery in the Gulf of Guinea.

“Now, what the strategy does is to look at our national security objectives and align these objectives with this administration’s goals in fighting corruption, giving access to improved education, taking care of the healthcare problems as well as increased productivity in the agriculture sector. But rooted in the strategy are issues that may not be visible to the necked eyes, but issues that have tended to be malignant to cause a lot of greater problems to this society.

“Fundamentally, if we are going to take care of these problems, we need to try and safeguard the fast-growing young population of Nigeria and guess what? We need to look at issues of poverty eradication and illiteracy.  I will tell you one thing. The administration of President Muhammadu Buhari in its pursuit for greater and enhanced security will not allow itself to be blackmailed or handcuffed by the disarming philosophy of compliance with certain aspects that are socio-cultural in nature which people tend to be adverse to dealing. We must grab the bull by the horn and deal with these issues.”

Speaking further on the revised strategy, Monguno said a committee of experts was constituted and tasked with the duty of revising the 2014 edition so as to tackle evolving trends of security threats.

According to him, the revised strategy places emphasis on human security as against the existing “state-centric orientation”.

“It addresses the current threats faced by the Nigerian nation as well as those threats that are anticipated to emerge in the near future. We have also proffered appropriate strategy to address these threats which demand a whole of government approach in combination with a whole of nation to achieve a whole of societal approach in dealing with these challenges,” he said.

“The core philosophy of this strategy is human security. This is a shift from the state-centric orientation we have been used to, to a new paradigm in which the safety and wellbeing of the individual citizens are the primary bases for all national security measures. And this is what I call the Muhammadu Buhari approach to National Security.”