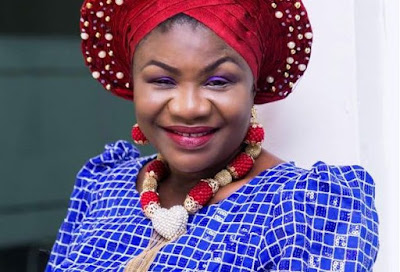 Veteran actress, Joke Muyiwa  is one thespian who has remained relevant despite her age. The revered role interpreter stated that 2019 has been a busy year for her.

In her words: “2019 has been so busy, I have done a lot of projects this year and I thank God for health, because if there is no health you cannot really achieve anything, but I thank God that He has really endowed me with good health.  So, I have been so busy this year and I like it that way because it keeps you away from mischief. I’m also a student; I am a M. Phil and PhD student of Theatre Arts. I am already finishing my M.Phil at the University of Ibadan and I have started my PhD at Redeemers University and by the special grace of God, early next year, I will be rounding off my programmes”, she told Tribune.

Asked if she would be quitting acting for the works of the ministry anytime soon, she said:”I won’t, because even the bible says “Your talents will make way for you”. So, while I am still in church, I will still be acting, and I will have a pointer in my plays that God is the Supreme Being that one should worship. I will not say I am doing a Christian film, no, but it will be godly. I will still take any role as an actress, because as an actress you are like machinery. So I will still take any kind of roles. Even two months ago, I played the role of ‘Iya Olokun’ in a movie, but that does not really make me ‘Iya Olokun’. It is just an act”.


Going down memory lane, she recounted how God saved her life when she was involved in a fatal auto crash.

“It was terrible. It was a very fatal accident, the car was written-off but I thank God, I came out alive. We were four in the car, my son, his fiancé and another guy with me. After the accident, nothing really happened but later I felt so sick that I could not even diagnose the sickness. Later, the calling came that the reason why God is still keeping me is that I should answer the call to carry the cross. Even though the two are at par, I, as an actress and a church worker, do not really gel you know, but then, if God has already destined something, you have to follow the path of destiny”.