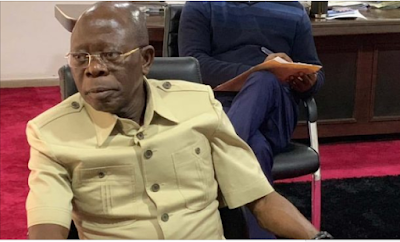 Adams Oshiomhole, national chairman of the All Progressives Congress (APC), has accused Mohammed Adamu, inspector-general of police, of planning to set him up.

He made the allegation while explaining his absence at the defection rally of Osagie Ize-Iyamu, governorship candidate of the Peoples Democratic Party (PDP) in the 2016 election in Edo state.

Ize-Iyamu had announced his membership of the ruling party at his private residence based on the directive of the IGP that a mega rally put together for the former PDP gubernatorial candidate should not hold.

Adamu gave the order following complaints by the Edo state government. Philip Shaibu, deputy governor of Edo, had visited the force headquarters where he told the police authorities that the rally was “a mere disguise to disrupt public peace”.


The administration of Godwin Obaseki, the governor, also placed a ban on political rallies in the state.

But speaking with reporters at his residence in Benin city on Friday, Oshiomhole said he gathered that the police wanted to put him in trouble.

“I saw that story planted by government House in Edo that I was placed under house arrest. That is not true I decided not to go to venue because the police in Edo and the IG want to set me up and create a situation where they will kill people then they will attribute it to me. I stayed away from the rally to avoid any form of bloodshed,” Oshiomhole said.

“The leadership quality of a man is tested under excessive provocation. If it was my old self, I will not only go there but I will make speech that by now the battle line is drawn. As National Chairman, I had to pay the price by abstaining from going there so that I deny the IG and Edo Police Command to go and kill people and blame it on me.

“I am embarrassed that the IGP will write me a letter informing me on the strength of my application which I informed him of our intention to do a rally. We informed police not for licence so that they can earn their salary. It is not for them to grant permission.

“I thought as National Chairman, I should be formal. I delivered the letter myself so that it can be more personal.

“He conveyed to me that he has directed the police to provide full security so that the exercise can have full security. The IG knows the political value of Pastor Ize-Iyamhu joining us. What I am not able to understand is how the same IG could be alleged to send a letter to Philip Shaibu that the rally will not hold.”

Oshiomhole, however, said he was happy that the rally held successfully and that the APC was poised to win future elections in the state.

“I am from here and I have worked with Pastor for which I am proud. It is a shame on Edo Police Command that people in broad day light thought they can intimidated me from arriving Benin. The police supervised and superintendent over this violence even as the IG has given me a letter. As at that time no other letter has been issued,” he said.

“For police to claim they are unable to secure the Airport road, as reporters, I ask you to explain what Edo people went through yesterday. Benin was locked down just to oblige the Ddeputy governor or the government of Edo State.”