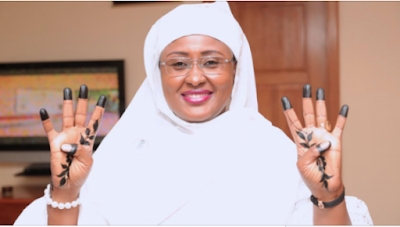 Aisha Buhari, Nigeria’s First Lady spoke from London on Thursday  and declared that she cannot be stopped from voicing out her opinion on issues in the country, because she has the constitutional right to free expression.

She was speaking as a guest caller on the popular TVC Programme, Journalists’ Hangout .

Some of the controversies she stirred with her comment on  the need to regulate social media, the state of insecurity and poverty, her carpeting governors and ministers for not  doing enough for the people were the issues in focus on the forum on Thursday.

Asked whether she has been told to stop talking. She retorted: “Who will stop me? Everybody is talking in the country. Everybody should talk. It is freedom of speech”, she said.

Does she engage in pillow talk with her husband,  President Buhari about the state of the nation, she joked: “There is no pillow in the Villa”, including the “other room”.

She clarified that she did not specifically blame the governors when she spoke last week at  the Nigerian Supreme Council for Islamic Affairs General Assembly and National Executive Council Meeting held at the National Mosque in Abuja, because she is aware the problems the country is going through have piled up as a result of total long-term neglect.

“We are all suffering from it. Whether you are an executive  or ordinary citizen. We can’t go to our villages  and sleep with  two eyes closed. It cuts across”.

She also clarified her position on social media regulation. She said at the NSCIA  forum, the Minister of Communications  shared a story where someone had called Vice-President Yemi Osinbajo to confirm whether Osinbajo had resigned as published in the social media. She said she was surprised that people laughed over it.

To her, it was a serious matter that officials would be indifferent to the spreading of fake news. And she told the audience that it was not a laughing matter. She expected  action to be taken by those in charge of such matters, to  bring an end to fake news.

She also criticised government’s response to issues it should not bother itself about, while keeping mute on very important ones. She cited the reaction from the Presidency over a PDP statement that former President Goodluck Jonathan would be sanctioned over the loss of Bayelsa to the All Progressives Congress. Aisha Buhari said this was strictly a PDP affair that ought not to have warranted a statement from the presidency.

In contrast, she noted, the Presidency  spin doctors did not move swiftly to kill the rumours that President Buhari was marrying a second wife.