I am doing nothing for free in 2020, not even ma%turbation - Juliet Ibrahim 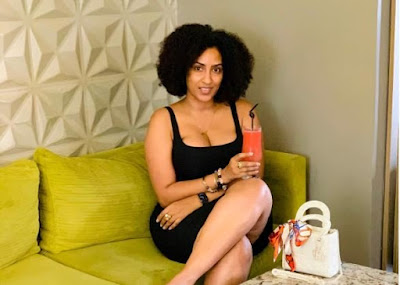 Beautiful Ghanaian actress, Juliet Ibrahim has opened up on what appears to be her financial plan for the year 2020, stating that she would be commercializing every service she once rendered for free.

The talented movie star took to Instagram to share a picture of herself sitting on a green sofa with a glass of smoothie and with a caption that appeared to be her new year resolution.

Recall that Ibrahim recently talked about her divorce with Kwadwo Safo, her ex-husband who doubles as a son to Kojo Safo Kantanka, a renowned pastor.


She revealed that she first met him in a strip club, yet, his family didn’t seem to approve of her own moral values.

“I was 24 years old when we decided to be together. And I’m the kind of person who works with what I have. So, if he had put all these into consideration and broke down what he expected from me, I would know how to handle things,” she had said.

“But we didn’t have this kind of conversation. The only thing we talked about was when I had kissing scenes in some of my past movies. So, I started controlling my scenes because of my own judgments. Even he and I spoke about it and we believed that we better off stay apart.”