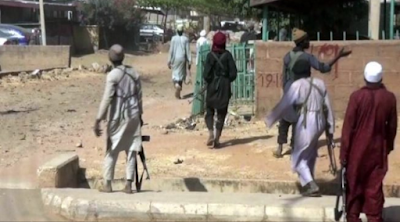 At least four persons were killed while five were abducted in an ambush suspected Boko Haram insurgents laid along Monguno road in Borno state on Sunday.

A technician working with a humanitarian agency and four other aid workers were abducted by the attackers who mounted a check point at Gasarwa village, about 40 kilometers from Monguno local government area of o the state.

Malumbe Yarima, a commercial driver who witnessed the attack revealed that the insurgents spent two hours unchallenged at Gasarwa.

“We left Monguno at about 7:30 am heading to Maiduguri but on reaching Gasarwa, we fell into the hands of Boko Haram militants who were at a check point,” he said.


“The Boko Haram militants had three gun trucks and wielded with anti-air craft gun. They were well kitted in military camouflage.

“When we got to the scene, we met about 20 vehicles already in the queue. Three of the insurgents spoke fluent English while others spoke in Kanuri and Hausa. They asked used to alight from our vehicles and requested our identification cards.

“Those identified as soldiers, policemen, government, Christians and humanitarian workers were asked to step aside.

“Soldiers, civilian joint force and Christians and the other aid workers were taken to the road side and killed instantly.

“In my own vehicle, one person was killed. Although, his identity could not be ascertained, he was among those shot dead. They took our videos and pictures and documented us. Two of the insurgents who asked their colleagues to spare our lives, preached to us to repent and join the forces of God in the quest to establish Islamic caliphate

“We were later released around 10am. Apparently, I couldn’t tell you how many number of people that were abducted but they were aid workers.

“One other person in the queue we met at Munguno checking point was crying. When we asked what happened, he said his wife was among the women that were abducted.”

Bulama Biu, a senior military officer involved in the fight against insurgency, confirmed the attack, describing it as unfortunate.

Biu said troops had been deployed to clear the area and ensure safety of other motorists plying the road.

An aid worker, who spoke off the record, said two of those abducted by the insurgents were staff of his organisation.

He said the victims were on their way to Maiduguri “after providing life-saving assistance” to individuals and families affected by the ongoing humanitarian crisis in the northeast.

“Right now the office is working on the situation. We have forwarded the report to the UNOCHA for prompt action,” the aid worker said.