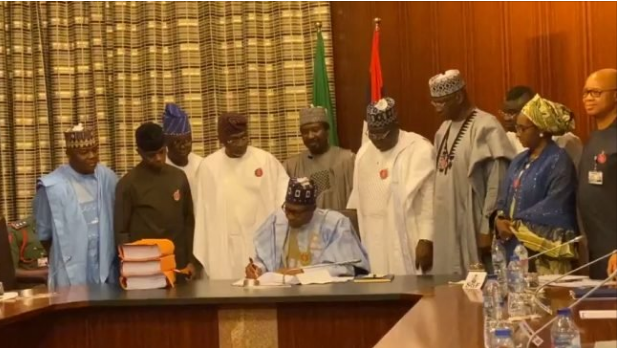 The president signed the budget document into law on Tuesday in the presence of Vice President Yemi Osinbajo, Ahmad Lawan, the senate president, Femi Gbajabiamila, speaker of the house of representatives, amongst other principal officers.

It is my pleasant duty, today, on my 77th birthday, to sign the 2020 Appropriation Bill into law. I’m pleased that the National Assembly has expeditiously passed this Bill. Our Federal Budget is now restored to a January-December implementation cycle.
— Muhammadu Buhari (@MBuhari) December 17, 2019

The budget was increased by N260 billion from N10.33 trillion as contained in the proposal submitted by Buhari on October 8.

This is the fastest time since Nigeria returned to democracy in 1999 that the budget would submitted, passed and signed before the budget year commences.

With the budget signing, Nigeria is now on the January-December budget cycle.