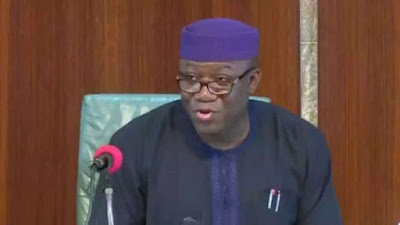 Ekiti State Governor, Dr Kayode Fayemi on Tuesday inaugurated the Board of Fountain Holdings Limited with a charge to members to ensure effective management of the state’s investments in order to create value for the people.

Dr Fayemi explained that the journey of effective re-positioning of the economy and investments of the state started in 2011 during his first term in office but lamented the neglect and the sorry state of those investments owing to mismanagement by succeeding administration that was unable to grasp the need to jealously guard the commonwealth of the state.

He said however that the state was already on the part of correcting those anomalies with the inauguration of the board whose members have the collective experience and individual diversity to re-position the state’s investments.

The Governor also announced the injection of $5million into the Ikun Diary farm by Promasidor Nigeria Limited, in partnership with the state government.

According to him, the investment will include procurement of cattle; equipping the Dairy farm; establish a farm to produce feed and renovate existing buildings.

“At full capacity, the farm is expected to produce over 9,000 litres of milk per day while creating jobs for hundreds of Ekiti people.” the Governor said.

Dr Fayemi further explained that the partnership would demonstrate the viability of the state’s agro-industrial processing zone adding that government was also working on the modalities to ensure that the host community reaps significant benefit from the investment and to use it as a model for future public-private partnership.

“During our first term in office, we incorporated Fountain Holdings Limited on August 12, 2011, to efficiently manage the existing business and investment portfolio of Ekiti state government. This was done to ensure existing and future investments made by Ekiti state government were professionally managed, to optimize value for the government and people of Ekiti state.
“This company ushered in a period of economic growth with investments in Ikogosi Warm Spring and Resort, Ire Clay Bricks Limited and Fountain Hotel, in addition to the management of Ekiti House and Fountain Court.

“We have also commenced a number of clear steps to show our seriousness in managing our commonwealth in future. As part of our strategy to optimize existing assets, we will constantly seek opportunities with the private sector to inject capital and management expertise where required; to ensure our investments continue to create jobs for our youths and value to the communities where these investments are located.” The governor stated.

On Promasidor, Dr Fayemi also added, “As proof of this, we have the leadership team from Promasidor here with us today, led by the Group Chief Executive, Mr Olivier Thiry who came into Nigeria specifically to visit Ikun Dairy Farm, which will soon be managed by a new company, the result of a joint venture between Promasidor Nigeria Limited and Ekiti state government.

“Promasidor is making an initial investment of $5 million in the farm which will be invested to procure cattle; equip the Dairy farm; establish a farm to produce feed and renovate existing buildings. At full capacity, this farm will produce over 9,000 litres of milk per day and put hundreds of our people in jobs.
“The work being done with Ikun will be replicated for assets like Ikogosi Warm Springs and Resort; Ire Clay Bricks Limited; Fountain Hotels and other assets”.
Earlier, the Managing Director of Fountain Holdings Limited, Mr Seyi Ayeleso said with the inauguration of the board, Fountain Holdings was now well-positioned to serve as the arrow-head of government enterprise to undertake sundry businesses in purchasing, consulting, construction and other specialized services.

Ayeleso assured the government that the new Fountain Holdings under the Chairmanship of Mr Jide Ogundare was capable of providing the necessary guidance and support for the actualization of the vision and aspiration of the state adding that the management will aspire to meet and possibly surpass the expectation of government.

Speaking on behalf of other board members, the Chairman, Mr Jide Ogundare appreciated Governor Fayemi for giving them the opportunity to serve the state in that capacity assuring that they will deliver on the mandate given to them Other members of the Board are Dr Babatunde Adeniran; Mr Folakemi Fatogbe; Dr Adetoyi Olabode and Mrs Abiodun Ayeni-Agbaje. At the event are the Deputy Governor, Otunba Bisi Egbeyemi and members of the State Executive Council among others.