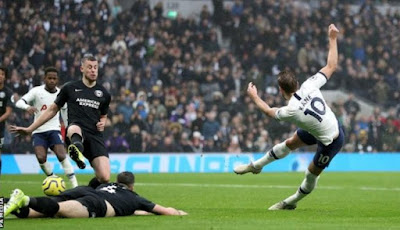 Tottenham renewed their pursuit of a place in the Premier League top four as they came from behind to beat Brighton 2-1 in north London.

The result lifts Spurs up to fifth in the table, three points behind fourth-placed Chelsea who host Southampton later on Thursday.

Sheffield United could leapfrog Jose Mourinho’s side with a win over Watford (also on Thursday) while Wolves, another side on the fringe of a top-four position host Manchester City on Friday.

Adam Webster had given the visitors a richly deserved lead, heading in from Pascal Gross’ right-wing delivery towards the end of the first half.


However, Spurs, who played at a pedestrian pace during the first period, raised their tempo after the interval to fight back.

And Dele Alli’s sublime lobbed finish then found the top left corner to complete the turnaround.

It ensured Brighton’s miserable record on 26 December continued – with the Seagulls now winless in their last 11 games on this date.