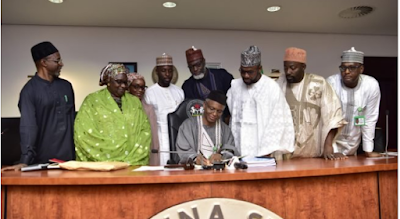 Hadiza Balarabe, deputy governor of the state, had submitted the draft budget of N257.9 billion to the state assembly on October 15 but it was later increased to N259.25 billion.

El-Rufai said N184.1bn (71%) was earmarked for capital expenditure while N75.14 billion is for recurrent expenditure.

Capital expenditure on education and health constitute N75.44bn of the entire N184.1bn capital budget, while capital spending on infrastructure and housing will take N68.5bn

The governor described the budget as “reinforcing the government’s governance agenda to build human capital and promote equal opportunity”.

He said his administration has successfully aligned the fiscal and calendar years in the state for five consecutive years.

The governor commended the state house of assembly for cooperating with the executive arm of government to realise the administration’s policies and programmes.

He described the assembly as “the most productive in the history of the state”, saying that they had passed over 80 bills into law.

He also commended Aminu Shagali, speaker of the house, for working across party lines to improve the fortunes of the state.

He also thanked the deputy governor for working tirelessly to produce the draft budget estimates and for presenting the document to the assembly.

El-Rufai said his deputy is “the first woman and indeed the first deputy governor to present a draft budget in the history of the country.”