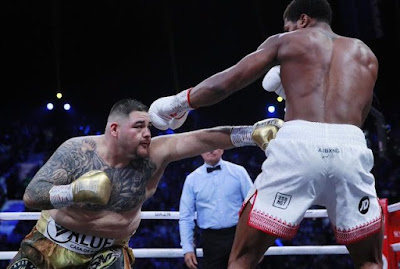 Deontay Wilder, the man who may likely be heavyweight champion Anthony Joshua’s opponent very soon, has slammed him for the tactics he used in his victory over Andy Ruiz Jr on Saturday.

Joshua reclaimed the WBA, WBO, IBF and IBO world heavyweight titles following a comprehensive win via unanimous decision in Saudi Arabia. Following his shock defeat at Madison Square Garden in June, Joshua used clever movement and worked behind a stiff jab to keep Ruiz at bay in their rematch. Two ringside judges scored the contest 118-110, while the other delivered a more comprehensive verdict of 119-109, all in Joshua’s favour.

But Wilder, the WBC heavyweight champion and who remains unbeaten after his win over Luis Ortiz last month, has criticised Joshua for adopting a similar style to Wladimir Klitschko to get over the line against Ruiz.

‘Joshua did what he had to do to get the win. He ran around the ring and was on his bike all day,’ Wilder told The Athletic.


‘Basically, he had Klitschko in the camp and he was a lot like Klitschko: that jab-grab-hold method. That’s all he did tonight.

But he was so hesitant… Joshua’s mentality was to survive. The Klitschko method.–Deontay Wilder

“You want to dominate guys, man. Maybe I’m just too rough, too hardcore and too much of a dream for this time and era, maybe the world wants that nice shit… my mentality is so different from these other fighters.

‘But when I think of myself as a champion… you want to come out there and whoop his ass.

‘I’m not coming in, after losing to this guy, to just dance and grab and jab and hold. ‘I’m going to show the world and convince them I am the very best and that no one is close to me, especially with what’s going on in the division right now. It’s a time of proving who is the best.

‘Joshua had many times he could’ve gone for the finish after he landed the right hand.

‘But he was so hesitant… Joshua’s mentality was to survive. The Klitschko method.

‘The difference is my mentality is that of a beast, a warrior, a king, an emperor – all those things. If he calls himself a king, he’s just on the nicer side of it. This is a brutal sport and that’s how I treat it. I ain’t showing no love for anybody in that ring.’