Democracy is just too slow for me – President Buhari 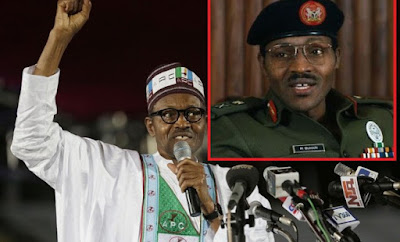 President Muhammadu Buhari on Tuesday, said democracy was too slow for his liking.

Buhari said this at the Presidential Villa, Abuja, at a short ceremony where his aides and some members of staff presented a card to him on his 77th birthday.

The President compared the current anti-graft war to the one he prosecuted as a head of state between 1983 and 1985, and admitted that he had learnt the hard way that the current democratic system was different from when he first came in 1983 as a military ruler.

As head of state, Buhari within few months in 1984 tried and jailed Second Republic governors such as Olabisi Onabanjo (Ogun State); a former Anambra State Governor, Jim Nwobodo, who was jailed for 22 years and an ex-governor of Imo State, Sam Mbakwe.

Buhari recalled with nostalgia how he quickly jailed those who stole money from the country and returned the recovered funds to the respective states in good time, using the various committees he set up.

Buhari also recalled that when his first regime was toppled, what he got in return was that he was arrested and put in prison.

“Well, like I said, I have learned in the hard way. When I came in uniform, I got those who were leading, took them to Kirikiri (Maximum Prisons) and told them they were guilty until they could prove themselves innocent.

“I put, based on almost all the geopolitical zones, committees to investigate them. Those that were found to have lived beyond their means, the balance was taken and was given to the states.

“But, I myself was arrested, detained…So, under this system (democracy), which is supposed to be more accountable, it is too slow for my liking, but I have to follow it.”

Buhari however said he would do everything within his powers to guarantee free, fair and credible polls in 2023.

Buhari stated that this would include using the security agencies to contain any threats to the electoral process by those who might want to force themselves on Nigerians.

Buhari preached hard work as the only option to succeed at the polls, saying that whoever planned to be President or contest election to the National Assembly must work hard.

He said, “What I want to promise Nigerians is that I will work very hard on free and fair elections.

“All those that are going to succeed in the National Assembly and the Presidency, they better work very hard because I will make sure, using the law enforcement agencies, that elections are free and fair; that nobody uses his office or his resources to force himself on his constituency.”

This was not the first time the President promised violence-free elections.

Ahead of the 2019 general elections, such assurances were made, including the warning that ballot box snatchers would pay with their lives if caught by the military.

During the November 16 governorship elections in Bayelsa and Kogi states, similar elaborate preparations and assurances were also made by the security agencies.

However, widespread violence, including deaths, was reported during the elections.

There has yet to be diligent prosecution of the perpetrators of the electoral violence during the 2019 general elections and the subsequent polls.

However, on Tuesday, Buhari insisted he would guarantee free, fair and credible polls, using the security agencies to protect the process.

Buhari called for patience and patriotism by Nigerians to guide the country to the future.

“Patience and patriotism, that is what we will see as a rule. Nobody can have his own way; we better accept the truth that we are one Nigeria, we keep on building.

“God has blessed us with land and people and resources. We must have the patience to exploit them and leave something for our future generations”, he added.

He described Nigeria a “terrific country” where people must talk about you negatively, no matter how well you tried as someone in a leadership position.

“I think I have come to accept the realities of leadership in Nigeria; you can only try, it is a terrific country.

“No matter what you do, there are people on a daily basis that look for your faults and go to the press. So, you have to learn to live by that”, he stated.

Buhari, at the ceremony, which was attended by the Secretary to the Government of the Federation, Mr Boss Mustapha, and the Permanent Secretary, State House, Mr Jalal Arabi, cut a giant cake that was baked for him to celebrate his birthday.

But Aisha, the wife of the President, was absent from a brief photo ceremony to mark Buhari’s 77th birth on Tuesday.

Also absent were Vice-President Yemi Osinbajo and the Chief of Staff to the President, Mr Abba Kyari.

It was learnt that Aisha was on a private visit to London.

However, in her felicitations she sent to Buhari, Aisha addressed him as a ‘General’ while celebrating her husband.

Using her twitter handle, @aishambuhar, she tweeted, “Happy Birthday my incorruptible GMB (General Muhammadu Buhari). I wish you Allah’s guidance, protection and good health to continue steering the affairs of our dear nation.

Aisha posted the picture of a previous birthday event, where family members stood with Buhari to mark his birthday.

But, on Tuesday, she was absent due to her London trip.

However, her son, Yusuf, was at the event.