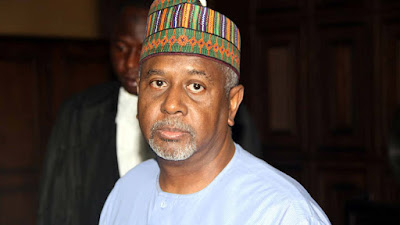 The immediate past National Security Adviser (NSA), retired Colonel Sambo Dasuki, has stated he would not grant any media interview.

The prince of the Sokoto caliphate, who spoke through an associate, Thursday night, revealed what he would do in the coming days and weeks.

Dasuki was released Tuesday night by President Muhammadu Buhari after spending four years in the custody of the Department of State Service (DSS) despite court orders granting him bails.

The source disclosed that Dasuki intends to pay his last respect to his late father who passed away weeks after his initial arrest.


“He is resting and has foreclosed the possibility of any media chat. Even the story by VOA did was not a direct interview. They only used excerpts of what he said in presence of his family when he returned home”, he said.

“Dasuki also declared that he is preparing for trial. He is waiting for the next date and would definitely attend this time. You would recall he boycotted court sittings because the government failed to comply with bail orders.

“Furthermore, Dasuki would for now only be around his family members, he is receiving very limited visitors. He expressed desire to visit his late father’s burial ground to pay last respect and also pray.”

The source added that “Since his freedom, Dasuki has remained calm and consistently ascribed his ordeal to God’s will. No blame games or accusations.”

It would be recalled that the former military officer was not allowed to attend the burial of his late father, Ibrahim Dasuki.

Pa Dasuki was buried at Hubbaren Shehu, Sokoto, after a funeral prayer at the Sultan Bello Juma’at Mosque.

Dasuki, who was the 18th Sultan of Sokoto died at the age 93 at the Nigeria-Turkish hospital, Abuja, after a protracted illness.

Nigerians then reacted divergently on government’s refusal to allow the former NSA attend the funeral.

While some did not see anything wrong with government’s decision, others likened the event to that of 1985 when Buhari was not allowed to attend his mother’s burial after he was detained following the coup against his regime.

Buhari took over power after the military coup of December 31, 1983, saw the sack of elected government of President Shehu Shagari.

In 2015, Dasuki said he never maltreated Buhari after he was chased out of power and that Buhari cannot say he is not aware of the man behind the regime change.

“I always respect and dignify my seniors and those in positions of authority whether in service or after”, he stated.

“Though a young officer, I was reluctant to be among those that arrested him. And I was not. I only met him afterwards at Bonny Camp with Lawal Rafindadi.

“There is no way I could have maltreated him as being alleged in some quarters. I am glad most of the actors are still alive.”