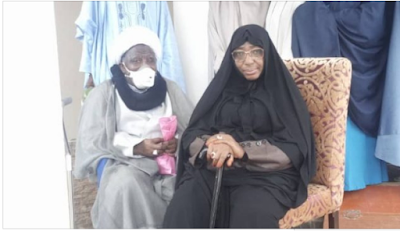 A Kaduna state high court has ordered the transfer of Ibraheem El-Zakzaky, leader of the Islamic Movement in Nigeria (IMN), and Zeenat, his wife, from the custody of the Department of State Services (DSS) to a correctional centre in the state.

In his ruling on Thursday, Gideon Kudafa, the trial judge, said this will enable their lawyers and doctors to have easy access to them.

The couple have been in DSS custody since December 2015 when they were arrested after a clash between soldiers and IMN members in Zaria, Kaduna state.

The judge adjourned the case till February 6, 2020, for the commencement of trial.

There was a heavy security presence around the court on Thursday as gun-wielding policemen and soldiers blocked all roads to the state high court complex.

Journalists were also prevented from entering the court premises.

El-Zakzaky and his wife are being prosecuted by the Kaduna state government for alleged culpable homicide, unlawful assembly and disruption of the public peace.

On August 5, the court granted the IMN leader and his wife, leave of absence to travel to India for medical treatment.

But the couple were not treated in India. They accused the federal government of frustrating their mission by allegedly conspiring with Indian authorities to deny them access to their preferred doctors.

Speaking while in India, El-Zakzaky told an unidentified person in a secretly recorded tape that he was being treated well in DSS custody.

“I have been about four years in prison now; a house fully furnished. In fact, our next neighbour was the senate president; a large house. I was free to move about. Similarly, when they moved me to Kaduna I was in the best best area – government reserved area. It is a house fully furnished with large bedrooms and I was free. I have never been in detention with police there; in fact, the soldiers used to stay outside at the gate. That is what they have been doing. When we came here we were put in prison,” he had said.