Buhari, Magu, Justice Bulkachuwa under fire over Orji Kalu’s conviction, sealing of The Sun by EFCC 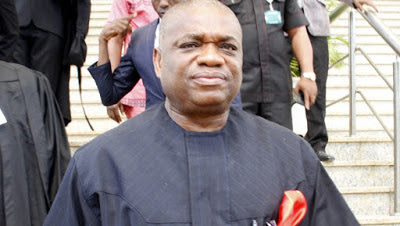 A frontline Civil Rights Advocacy group, Human Rights Writers Association of Nigeria, HURIWA, has described the reported sealing of The Sun Newspaper by the Economic and Financial Crimes Commission (EFCC) as unjust and unfair.

The group noted that the newspaper as a business entity was not part of the parties to the suit in which the former Abia State Governor, Orji Uzor Kalu, was convicted by the Federal High Court over fraud of N7 billion.

HURIWA’s statement was signed by Emmanuel Onwubiko and made available on Sunday.

The group has also asked the acting chairman of tge EFCC, Ibrahim Magu to show professionalism and stop the political media showmanship of jubilating all over the place over the conviction of Kalu as if to say there is a hidden agenda that the conviction has helped to achieve for some political interest in the corridors of power.


HURIWA said the only time committed patriots will applaud the EFCC is when some of those who are Ministers today despite their accusations by the anti-graft agency as having committed series of corruption related offences are arrested, prosecuted and convicted.

The rights group also condemned the withdrawal of the charges against Senator Danjuma Goje.

HURIWA also stated that the trial and conviction of Kalu is insufficient to acclaim that the EFCC and President Muhammadu Buhari led administration was carrying out forensic anti- Corruption warfare.

It said that the APC Senator is a political victim of anti-Igbo vigilante justice and the selective justice being practiced actively by the current Federal government.

HURIWA also expressed shock and consternation that the President of the Court of Appeal Justice, Zainab Bulkachuwa, has dabbled into the political fray of jubilating over the conviction of Kalu even when she is aware that as a citizen of Nigeria covered under the Nigerian Constitution the lawmaker has a right of Appeal up to the Supreme Court.

The rights group said as one of those who believed in the sanctity of the Constitution and as a civil rights advocacy group that works for equality of rights, social justice, equity and fairness, it supports the qualitative, non-biased and fair prosecution of all allegedly corrupt politically exposed persons so the stolen public fund are refunded to those specific states from where the heist happened whilst the convicts were in political office.

HURIWA, however, expressed reservation that the conviction of Kalu may have some political connotation and may not be too far from the politics of the 2023 elections in which supporters of Buhari in the North are vigorously campaigning for the office of the President to still remain in the North which Kalu is known to have opposed vigorously insisting that he doesn’t support third term agenda.

“Orji Uzor Kalu has also alleged victimization because he opposed the retaining of the Presidency in the North in 2023 and it would seem there is an ongoing jubilation amongst key Northern politicians which has unfortunately reached the EFCC and the Court of Appeal with the Acting chairman of EFCC and President of the Court of Appeal making heavy media shows of this specific conviction of erstwhile governor of Abia state against clear provisions of the ethics of the offices which impose on them the obligation to maintain and manifest the highest sense and attribute of non-biased and non-partisan leadership,” the statement added.

HURIWA expressed shock that the EFCC could embark on this illegal marking of The Sun Newspaper assets in Lagos when there is a pending appeal before the Supreme court of Nigeria in a separate suit unrelated to the suit in which the former Abia State governor was convicted and for which he has challenged his conviction and that of his other firm known as Slok Nigeria limited.

HURIWA, therefore, asked the EFCC to respect the constitution and await the decision of the Supreme court of Nigeria on the suit between EFCC and sun newspapers.

In a related development, HURIWA carpeted the President of the Court of Appeal Zainab Bulkachuwa for taking a position on the trial of Kalu.

HURIWA quoted Justice Bulkachuwa as saying: ‘I was part of the making of the ACJA. I have witnessed its implementation. I was interested in what will come out of it.

‘I had the chance to fully participate when applications were made by the EFCC (Economic and Financial Crimes Commission), Federal Ministry of Justice and other prosecuting bodies, that our Justices, who were elevated to the Court of Appeal, be given fiats to go back to the various High Courts and conclude the case they have started.

‘First, we had to determine at what stage they could go in. After looking at the ACJA, we saw that once all the prosecution’s witnesses have testified, there will be no need to start the matter de novo (start afresh) again. We felt it was more in the interest of justice to have the matter completed…The most recent is that of Justice (Mohammed) Idris when he completed the case of former Governor Orji Uzor Kalu.’

HURIWA also asked the Federal Government to explain to Nigerians why the same government that concluded the trial of Kalu is the same administration under which Senator Danjuma Goje a former governor of Gombe State was reportedly pardoned of the then pending charges of multibillion alleged fraud by the EFCC.

HURIWA stated that also the former governors of Akwa Ibom and Bayelsa states had their charges by EFCC overlooked just so they can be appointed as ministers in the current cabinet of President Buhari.