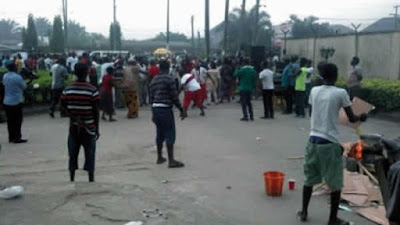 There was a commotion in Pako and Surulere areas of Lagos State over a reported clash among two rival cult groups.

Residents in the areas said that they were confused when they heard a cascade of gunshots.

They said the incident happened a few minutes past 10am on Monday around Cassette Bus Stop.

A resident, Olamide, said, “We initially thought it was a robbery incident. But we later heard that they were cult members. We all had to run for our lives.”


When contacted, the Police Public Relations Officer in Lagos State, Elkanah Bala, said a team of Police officers had been sent to the scene.

He said, “The operation is ongoing. We have Police officers there to take care of the situation and tell us what actually happened.

“I was initially told it was a clash between some cults, but I don’t have the details yet.”