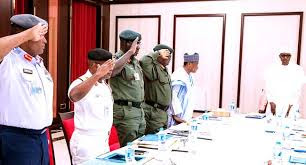 No agenda was released prior to the meeting.

But it is expected the president will receive briefings from the service chiefs and the Inspector General of Police, Mohammed Adamu.

Buhari and the security chiefs today: the meeting in session


The meeting is also expected to review the security challenges in the country, the occasional attacks by Boko Haram and ISWAP, the ambush of civilian transport and the recent execution of 11 Christian hostages by ISWAP.

In his Christmas message, Buhari sent dire warnings to all the bad guys in the country: the insurgents, terrorists, armed robbers and kidnappers, including economic saboteurs to retrace their steps.

He said the security forces and law enforcement agents are now positioned to deal with them.

”It is in line with the spirit of Christmas that I call on all elements whose actions are opposed to what the season represents, especially, insurgents, terrorists, armed robbers, kidnappers and economic saboteurs, to retrace their steps and join people of goodwill and common humanity.

“If they fail to heed this call, they will meet their end as the armed forces, security and law-enforcement agencies are poised now to confront and defeat them.”