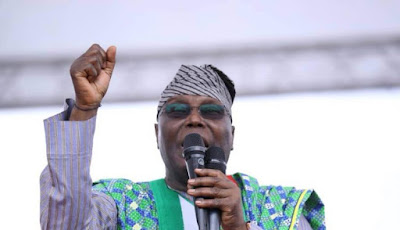 Former Vice President of Nigeria, Atiku Abubakar has announced a migration of all his business outfits into an umbrella brand known as the Priam Group.

He said the fusion of the businesses will make for better efficiency.

Atiku, a business tycoon and industrialist is the founder of a number of businesses spanning several sectors of the economy including manufacturing, media, banking, logistics, agriculture, printing, education, eateries, beverages, real estate and animal food processing. He is also a principal shareholder in many more companies both within and outside of Nigeria.

Under the new arrangement, many of the business concerns wholly connected to Atiku Abubakar will come under Priam Group: one brand and one common management.


Priam Group will take over assets and liabilities of the existing companies including, more especially, staff emoluments and other welfare.

Atiku believes that this process of restructuring will bring operating efficiency, cost control and good corporate governance to the group companies and will also allow it to focus on future growth opportunities.

To this end, Priam Group has completed its feasibility study for the construction of a rice milling company by the River Benue in Adamawa and has plans to (by June 2020) commission its Abuja animal feeds factory after some delays in getting the factory equipment.

The group is also looking to actively expand its bottling capacity to cover whole of north and is investing in expanding its Logistics fleet to service the future capacity expansion. The future plans also entail having a larger footprint of its chicken cottage brand and wider reach for its Television channel by going on Satellite.

Given the challenges associated with the processes of this kind of restructuring, it is not uncommon that some of the companies which migration has yet to be perfected will experience some difficulties in carrying out their day to day mandates. It is also not unexpected that a restructuring procedure of this size and nature would come with some likely job rationalisation especially, since each of these entities has its own finance, admin, marketing, HR and ancillary support operations which would now be consolidated and undertaken at the group level.

In specific reference to some of the news reports in the media regarding Gotel Communication – Gotel TV and Radio – have been migrated to the Priam Group structure.

The Group structure is the one responsible for the salaries of workers in the two media outfits. What is, however, being experienced now is the teething problems associated with the integration, with Gotel being a late entrant to the process. It will ease out.