APC not nursing fears of losing Edo to PDP – Oshiomhole 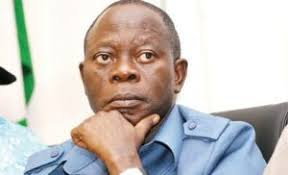 The National Chairman of the All Progressives Congress (APC), Comrade Adams Oshiomhole, has said his leadership will do whatever needs to be done to ensure the party remains one in his home state, Edo.

Comrade Oshiomhole, who gave the assurance on Friday during a chat with State House Correspondents after meeting with President Muhammadu Buhari, along with the party’s states’ chairmen at the Presidential Villa, Abuja, also assured that the APC was not at risk of losing Edo state in the next election.

Oshiomhole was responding to a question about the crisis bugging the party in his home state, involving himself and the state governor, Mr. Godwin Obaseki.

According to the party Chairman, besides the fact that the people of Edo state had accepted the APC as a preferred political party since 2008 when he was elected as governor of the state, he noted that he had invested too much personal efforts into building the party, he would not do anything to undermine it.


He went further to recall the decision of the party to commence a reconciliation process in all states of the country by setting up a national reconciliation committee, saying the efforts to sort all matters of disagreement out in the matter is aimed at giving deserved benefits, not just to the members of the party, but to people of the states under its rule.

“Let me reassure you, APC is not at risk of losing Edo state in the next election. Edo people have accepted APC as a preferred party since 2008 when I assumed office and if you look at the result of elections, it shows that the people have faith in our party, on the basis of the performance of the government that the party has produced, both when I was there and even when I had left.

“I believe that the issues in Edo and in every other state, will be resolved peacefully, to the benefit, not just of the party, but of the people in those states. We are committed to retaining Edo, particularly now that we have Bayelsa added to Edo, the more reason we cannot do anything which in our opinion, can possibly lead to APC losing Edo State, if anything, if you have been monitoring what is going on, more and more people are coming to join the APC in Edo.
“If they have fears that we may lose, nobody will leave PDP to join APC. So if people are leaving PDP to come and join APC in Edo State, that is the most potent, bold statement about the level of confidence that even the people in the opposition recognize that if they want to be government, the party to join is the APC.

“Be rest assured that as the National Chairman, even if I wasn’t National Chairman, the investment that I have put in, the much effort that we invested to be able to defeat PDP in 2008, against federal might, when President Obasanjo was the supervisor of that election and I got reelected and you know the PDP forces in Edo, if you have invested that kind of effort like I have invested like I have done and God bless it, you will do nothing that will undermine it.

“Nothing anybody will do that will make one forget that a lot was invested and therefore we must keep the house together, whatever it will take. I am sure we will keep Edo together for the good, not only of our party, but more importantly, for the good of the people of Edo state.

“You may have read in the papers, even on the electronic media last week when we had the meeting of the National Caucus and subsequently Friday the 22nd, we had a meeting of the National Executive Council. The resolution taken at that meeting is that a national committee will be set up to reconcile those aggrieved for whatever reason. I will tell you we are on top of the situation”, Oshiomhole explained.