ANALYSIS: Orji Kalu: From Governor to Senator to Prisoner 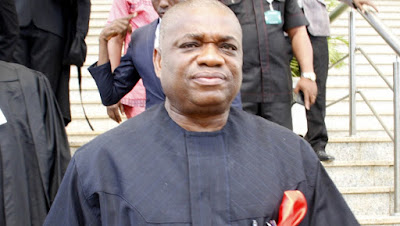 On Thursday, the Federal High Court in Lagos sentenced a serving senator and former governor of Abia State, Orji Kalu, to 12 years in prison after convicting him of N7.65 billion fraud.

Justice Mohammed Idris pronounced Mr Kalu guilty of the charge in a trial that lasted for 12 years.

Mr Kalu was tried alongside his company, Slok Nigeria Limited, and Udeh Udeogu, who was Director of Finance and Accounts at the Abia State Government House during Mr Kalu’s tenure as governor.

In this analysis, we look at the rise and fall of Mr Kalu who has been in politics since the return of democratic rule in 1999.

Born on April 21, 1960, the year Nigeria became independent, Mr Kalu was elected governor of Abia State in the 4th republic.

Mr Kalu is the chairman of the Daily Sun, a Nigerian daily print newspaper published in Ikeja, Lagos, Nigeria. The newspaper was incorporated on March 29, 2001, and began production as a weekly on January 18, 2003, and as a daily on June 16, 2003, while he was serving as governor.

He also doubles as the chairman of the New Telegraph which targets domestic and foreign readers in major urban centres throughout the country and covers political, social, and cultural issues.

The Trial
On July 11, 2007, Mr Kalu was arrested by EFCC on charges of corruption while serving as the governor of Abia State.

He was later released on bail, and accused the Olusegun Obasanjo regime of persecuting him during and after his tenure in office, an accusation mentioned by former U.S. Ambassador to Nigeria John Campbell in his book, “Nigeria: Dancing on the Brink.”

He faced prosecution alongside a former Director of Finance and Accounts at the Abia State Government House during Mr Kalu’s tenure, Ude Udeogo, and Mr Kalu’s company, Slok Nigeria Limited.

Though he left office in 2007, in October 2016, EFCC renewed its prosecution and preferred 34 count charges against Mr Kalu. But he and Mr Udeogo pleaded not guilty to the charges and were granted bail.

The EFCC ultimately reactivated Mr Kalu’s case last year, filing amended graft charges of up to N7.7 billion against him. In November 2018, a judge frowned at Mr Kalu’s foreign travel without the permission of the court and the EFCC.

Senatorial Bid
The fact that he was standing corruption trial did not deter the former Abia governor from returning to Nigeria and successfully contesting a senatorial election.

He won the Abia North senatorial election on the platform of the All Progressives Congress (APC) in February 2019.

He later emerged as the Senate Chief whip.

Mr Kalu is a staunch supporter of President Muhammadu Buhari. He once said the president is a “close friend and father, who deserves all the support to make Nigeria better.”

The Fall
After 12 years of standing trial, he was eventually sentenced to 12 years in prison on Thursday.

In one of the counts against him, the EFCC alleged that Mr Kalu “did procure Slok Nigeria Limited – a company solely owned by you and members of your family – to retain in its account, domiciled with the then Inland Bank Plc, Apapa branch, Lagos, an aggregate sum of N7,197,871,208.7 on your behalf.”

The prosecution claimed that the N7.1 billion “formed part of the funds illegally derived from the treasury of the Abia State Government and which was converted into several bank drafts before they were paid into the said company’s account.”

The prosecuting counsel, Rotimi Jacobs, said the ex-governor violated Section 17(c) of the Money Laundering (Prohibition) Act, 2004, and was liable to be punished under Section 16 of the same Act.

Apart from the N7.1bn, which he was accused of laundering, the ex-governor and the other defendants were also accused of receiving a total of N460 million allegedly stolen from the Abia State Government treasury between July and December 2002.

The prosecutor said they breached Section 427 of the Criminal Code Act, Cap 77, Laws of the Federation of Nigeria, 1990. During the trial, the prosecution called 19 witnesses while the defendants testified on behalf of themselves.

Mr Kalu was found guilty of all the 39-count charge filed against him by the EFCC.

Mr Kalu, on Thursday. reportedly smiled at reporters and said, ‘2023, here we come’ as he was led out of the courtroom by Correctional Services officials after his sentencing.

He later reportedly said: “Where are you taking us to now? Please don’t handcuff me. I will follow you.”