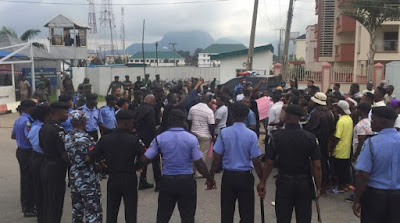 During the protest, which lasted for hours, there was traffic congestion on the major roads in the town, as the protesters barricaded the roads leading to the market.

Government officials had removed what the government described as illegal structures in the market to ensure sanity.

But, the women opposed the government’s action.

They claimed that they were not properly notified.


The protesters decried the attitude of the government officials.

He said it frowned at the attitude of the women who prevented government officials from carrying out their duty.

Lebi said that the officials were prevented by some market women, who undressed in protest and started abusing them.

He said the agency had the mandate of making the market functional to enable it generate income into the government’s coffers.

Lebi said it was an aberration for anyone to erect additional structure, which stood as obstruction to human and vehicular movement.

He said: “We went there to ensure sanity, having had discussion with them before the day and a similar exercise has been carried out in some markets across the state.

“Illegal structures destroy aesthetics value and orderliness of the market and they are dangerous to lives because vehicles do go in and come out.”

The permanent secretary said that the government would continue to employ a diplomatic and realistic approach to address the situation, in order to ensure sanity in the state-owned markets.