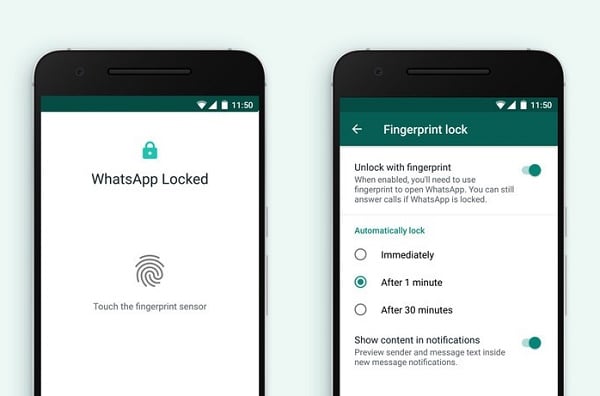 WhatsApp, a Facebook-owned instant messaging platform, has introduced the fingerprint lock feature on its application for Android users.

The new feature was announced through the cross-platform messaging service’s blog on Saturday — and comes on the back of its previously introduced ‘touch ID’ and ‘face ID’ features for iPhone users.

The feature, which first debuted on iOS devices in February, provides users with an extra layer of security when using the messenger, by requiring them to scan their fingerprint before opening the app.

According to the company, the feature can be activated on Android devices by first opening the settings menu, locating ‘account’, and then selecting ‘fingerprint lock’ under the ‘privacy’ option.

“Earlier this year, we rolled out Touch ID and Face ID for iPhone to provide an extra layer of security for WhatsApp users. Today we’re introducing similar authentication, allowing you to unlock the app with your fingerprint, on supported Android phones,” it wrote.

“To enable it, tap Settings > Account > Privacy > Fingerprint lock. Turn on Unlock with fingerprint, and confirm your fingerprint.”

Although the feature would prevent the application from opening until fingerprint is confirmed, WhatsApp noted that users would be able to answer calls when the app is locked while choosing whether the application will lock immediately or otherwise, among other personalization options.

The freeware, cross-platform messaging and voice over IP service had in January last year introduced WhatsApp Business, its standalone business application targeted at small business owners to allow companies communicate with customers who use the standard client application.

The client application, created by WhatsApp Inc, has since become the world’s most popular messaging application with over 1.5 billion users in more than 180 countries around the globe.