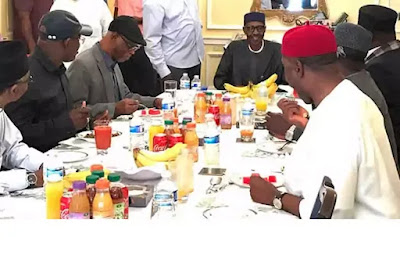 The Nigeria Governors’ Forum and the Federal Government said they have commenced a Human Capital Development plan towards moving 24 million Nigerians out of poverty before 2030.

The NGF disclosed this in a statement by its Head of Media and Public Affairs, Mr. Abdulrazaque Bello-Barkindo, on Friday in Abuja.

Bello-Barkindo said that the plan was jointly embarked on by the forum and the Office of the Vice President, Prof. Yemi Osinbajo.

He said that the process commenced on Monday in Kaduna State and culminated in Ekiti State on Thursday.


According to him, the overall vision of the HCD was concentrated in three thematic areas which were education, public health and nutrition and the workforce.

“Human capital is the stock of habits, knowledge, social and personal attributes embodied in the ability to perform labour to produce economic value.

“It is unique and differs from any other capital. It is needed for people to achieve goals, develop and remain innovative,” Bello-Barkindo said.

He noted that the Core Working Group (CWG) of the plan led by Yosola Akinbi of the Vive President’s Office, commenced its sensitisation tour in Kaduna State.

He said that Akinbi at the state met with Gov. Nasir el-Rufai and the state’s HCD Focal Person, Sagir Ahmed.

Bello-Barkindo, however, noted that in spite of the strides of the HCD project in Kaduna State, drug addiction was impeding the progress of youths.

He added that drug addiction was also the cause of crimes in the state.

On his part, the NGF Chairman and Governor of Ekiti State, Dr Kayode Fayemi pledged total commitment to the vision of the HCD.

Fayemi said that several HCD plans initiated during his previous administration were jettisoned by his predecessor, adding that they were now gradually being returned to the governance tray.

Bello-Barkindo disclosed that the CWG also visited the Chairman of the Ekiti State Traditional Council, the Alawe of Ilawe, Oba Adebanji Alabi as well as some youth groups in the state.

Alabi told the CWG that while Ekiti State was the fountain of knowledge it was still groaning under the weight of adult-illiteracy because most elderly people were left behind in erudition.

The youths said that though they were allowed to make input into the budget, they would still like a bigger role in the state.