9:54 AM CuteNaija 0 Latest News in Nigeria 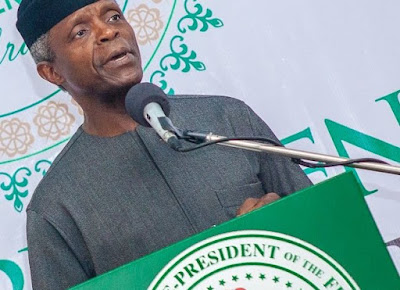 Some aides of Vice-President Yemi Osinbajo said to have been sacked by the Presidency have said they have not been sacked.

They spoke in separate interviews with on Thursday.

Daily Trust newspaper had on Thursday published a list of some persons said to have been affected by the sacking.

Our source reached out to some of those listed to ascertain if they had been officially informed about the development.

The Special Assistant to the VP on Innovation, Ifeoluwa Adedayo, claimed that he had not received any letter, saying that although he had read about the development in the media, he resumed for work at the Presidential Villa.

When told that there were reports that the access tags of some of them were withdrawn, making it impossible for them to enter the Presidential Villa again, he quickly told our correspondent that he would call back.

“I have also been hearing about it but I have not received any letter. We are still resuming for work,” he claimed.

He had yet to get back as of the time of filing this report.

The Senior Special Assistant on National Boundary Commission, Tola Asekun, in a separate interview asked our correspondent not to believe the reports of their sacking, but he also hurriedly ended the call.

“Don’t believe all those things, please,” Asekun said before hurriedly ending the call.

The telephone line of the Senior Special Assistant, Political, Gambo Manzo, also kept indicating that it was busy when our correspondent tried to reach him.

Also, one of the aides of Osinbajo on National Economy, Ms Yosola Akinbi, said she was not sacked.

Akinbi said she was upset with the barage of calls from her family members and friends seeking to know the truth about her job .

When asked whether she was either redeployed or relieved of her appointment, Akinbi through a WhatApp chat with one of our correspondents, denied the report.

She wrote, “Lol. Capital NO. I am in Ekiti State on a Human Capital Mission.”

When she was asked for an interview, Akinbi said, “I am sure you know that I am a private person. Just love to do my work.”

Akinbi who later spoke with our correspondent on the telephone said, “I know my office will clarify. I am not on that list. I am not even SSA NEC. I am sure they will clarify it. Nothing (laughs).”

When asked about her position in the government, Akinbi said ,“I work in the National Economy (office), but that is not my title, that is not my portfolio. I don’t want to talk about it. Let the office clarify it.”

The Presidency has, however, asked Nigerians to disregard the list, saying it is not genuine.

The Senior Special Assistant on Media and Publicity to the Vice President, Mr Laolu Akande, stated this is a message he posted on his Twitter handle.

“A list circulating in the media on the so-called sacked presidential aides is not genuine and ought to be ignored,” he tweeted on Thursday night.

Meanwhile, a Presidency source revealed that President Muhammadu Buhari might not be aware of the controversial disengagement of the aides, attributing their sacking to “a top presidential aide.”

The source claimed that Buhari was not carried along because the President had earlier approved the redeployment of the aides to ministries.

“While the President had already personally approved the appointment of all the 35 aides reportedly disengaged, he had also instructed their deployment to other ministries as part of a reorganisation of the Presidency proposed to him by the same top presidential aide who is seen to be engaging the VP in a power tussle,” he said.