VIDEO: Girl thrown to floor by police for not wearing a hijab 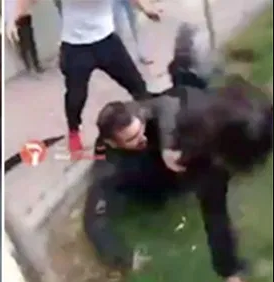 Shocking footage has emerged, showing the moment a teenager was thrown to the ground by an Iranian police officer because she was not wearing a hijab.

In a video shared by journalist Masih Alinejad, the girl is seen walking through Shahr-e-Rey when a man in uniform asks her to stop. However, she continues to walk.

The officer then drags her to the ground and punches someone else on the chin for trying to help the woman.

Iran’s military police enforce strict Shariah law, including ensuring that women’s hair is covered in public. But women have begun fighting back in recent years by flouting the ban.


Watch the video below.

Police brutality in Shahr Ray (Iran) against a teenager for not wearing hijab:

“Hi Masih.This girl was #WalkingUnveiled when a male officer warned her to stop, so that he could call female police officers for her arrest

The girl resisted.We tried to help her, but we couldn’t." pic.twitter.com/dzCgjh2A2k
— Masih Alinejad 🏳️ (@AlinejadMasih) October 29, 2019