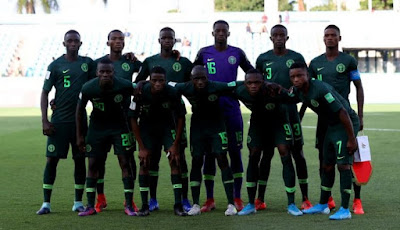 Following Nigeria’s exit from the U-17 FIFA World Cup competition in Brazil, Golden Eaglets captain, Samson Tijani, has apologized to Nigerians after a disappointing defeat to Netherlands which saw the team crash out in an unexpected way for the five-time champions.

The Golden Eaglets’ string of unconvincing performances, coupled with their exit from the tournament in Brazil left football enthusiasts to question the tactical prowess of the team’s technical crew.

Manu Garba’s boys lacked co-ordination in defence and also lacked the cutting-edge to put the ball into the back of the net.

Their campaign for a sixth world title in Brazil came to an end with a record of nine goals scored and nine goals conceded in four matches.


Eaglets failed to replicate their historical dominance in the South American country.

Minister of Youths and Sports, Sunday Dare has called for a total review of the football in the country after the team’s poor performance.

However, Dare, who was unimpressed with the performance of the team, said that Nigeria must exact greater responsibility from those charged with our football administration.

The hunt for a record sixth world title began on a pleasant note with coach Manu Garba’s boys forcing a 4-2 comeback victory down the throat of Hungary. A similar trick was repeated in a 3-2 come-from-behind win over Ecuador days after.

And it appeared as though another free-scoring Nigeria side was destined to rule the world yet again. Especially with the history books revealing that every time the Golden Eaglets had won their first two matches of an U-17 World Cup tournament, they went on to reach the final after replicating same feat in 1993, 2001, 2007 and 2015.

But that was as far as the good times lasted. Australia ambushed the Eaglets in the last group game and sent the highflying Nigerians crashing back down to earth with a well-deserved 2-1 win.

It was the very first time that the Aussies would defeat Nigeria in the U-17 World Cup after 7 attempts, with Nigeria triumphing in each of the previous 6 meetings.

It was also the very first time that the Golden Eaglets had conceded 6 goals in the group stage of an U-17 World Cup.

The defensive frailties were obvious but not much improvement was noticed when Netherlands, one of the lucky knockout stage qualifiers, faced the Eaglets.

Against the young Oranjes, the Golden Eaglets conceded 2 goals in the first 15 minutes of an U-17 World Cup match for the first time in the history of the competition.

And by the time the final whistle was blown, Netherlands’ Sontje Hansen had ruffled the Nigeria net thrice to become the first ever player to score a hat-trick against Nigeria at the U-17 World Cup.

The 3-1 defeat to the Dutch side also marked the first time that a Nigeria teen team would lose 2 consecutive matches at the U-17 World Cup and the first time the Golden Eaglets had lost 2 matches in a single edition of the World Cup.

It was an ignominious way to exit a tournament that promised so much but delivered so little.