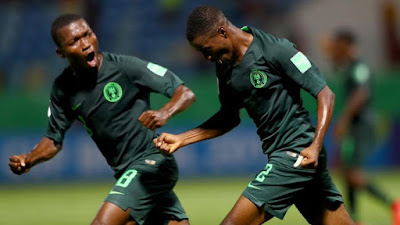 Nigeria’s Golden Eaglets will be aiming to make it three wins from three matches as the team face Australia in Group B final fixture of the FIFA U-20 World Cup at the Estadio Bezerrão on Friday.

The Manu Garba-led team has maintained a 100% winning record after beating Hungary 4-2 in their opening fixture before edging Ecuador 3-2 in their second match on Tuesday, to qualify to the Round of 16 of the competition.

It is expected that the Nigerian coach would want to rest those star players that qualified the team to the next round in order to give other players a taste of the action against Australia.

Having secured six points to move top of Group B, the team will be hoping to secure another victory against an Australian team that would be desperate for three points in a bid to have any outside chance of qualifying from the group.


The Aussie lost their opening encounter 2-1 to Ecuador before holding Hungary to a 2-2 draw.