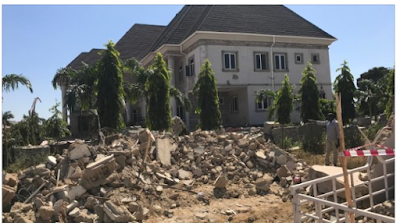 Tension has gripped some resident of Kaduna metropolis following the destruction of “over 300 houses” by the Kaduna State Urban Planning Development Agency (KASUPDA).

Some of the destroyed houses are still under construction while others had been completed and are being occupied.

Addressing journalists on Sunday, Yusuf Zomo, a landlord who spoke on behalf of the affected persons, said officials of KASUPDA stormed the communities around 12 midnight on Friday and went about “demolishing” houses without any prior notice.

Findings showed that most of the houses were partially destroyed while in some cases fences were pulled down.

Zomo said personnel of KASUPDA, accompanied by armed security agents, arrived the communities with bulldozers and went from place to place, “demolishing over 300 houses.”

“Initially they said they didn’t want to see containers on the road and owners of containers were directed to remove them from the road. The owners of the containers complied with the directive,” he said.

“At about 12 midnight on Friday when everybody was sleeping, they (KASUPDA ) moved in with caterpillars and bulldozers. They were accompanied by armed security men who threatened to shoot anyone who came close to them.

“People were sleeping in their homes when they heard that houses were being pulled down; they had to run. If you don’t run out, they will pull down the house on you. People were shouting and running helplessly.

“If this is a government of the people and they claim that the land belongs to them, why didn’t they come in the day time and talk to us and tell us their intentions?

“Up till this moment we don’t know what is their reason for pulling down our houses. We are crying out to the world to hear what the government of Kaduna state have done to us. Is Governor Nasir el-Rufai aware of this or not? We are not fighting, we cannot fight them… But we are the ones who voted them to power. If there are no people, there is no government. They should have come in the day time and seek audience with us so that we can discuss and understand ourselves.”

Reacting to the demolition, Ismaila Dikko managing director of KASUPDA, said the houses were built illegally.

He said despite several warning, people refused to stop building in the area.

Dikko said since 2012 the agency issued “stop work notices“ to those who built on the land but they ignored this.

“The area is part of the eastern sector gazetted in 1994 with an order that doesn’t allowed development without planning permission and statutory rights of occupancy,” he said.

“Ask if they have any permits before development and our ‘X mark‘ and painting have been all over their properties advising them to stop.

“We have issued stop work notices since 2012 but they went ahead to build illegally, this is not acceptable.The area has its plan, with schools, cemeteries, markets, police station, hospital, etc, but they decided to build without regards.”