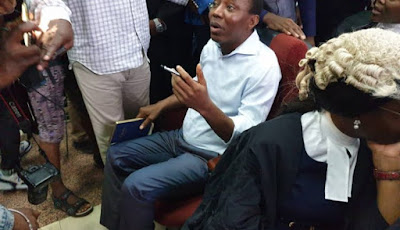 The Federal High Court in Abuja has denied Femi Falana, defence counsel to Omoyele Sowore, application for adjournment, and prosecution has been asked to call the first witness in case of felony and others again the Revolution Now convener and co-defendant, Olawale Bakare.

Falana made the case that the defence is at a disadvantage because the DSS had refused access to prepare the case with Sowore.

In the circumstances, Femi Falana is asking for an adjournment to allow the defence to take full instructions from Sowore so they can be fully prepared for the trial. Since they are facing serious allegations including treasonable felony, the defence needs to prepare adequately.

“I have practically been declared persona non grata at the DSS facility.” – Femi Falana speaking on denied access to Sowore.


The Prosecutor gave a timeline of events, arraignment – Sept 30th. Bail application & approval- Oct 4th, variation of bail terms- granted on Oct 21st, and stated categorically that at no point in time did the DSS restrict access to Sowore by Falana or any other counsel.

Prosecutor repeats that charges were filed on Sept 20th so, till Nov 6th, the defence had ample time to prepare the case, and that the prosecution is ready to go ahead and they have witnesses.

He stated that only Counsel Marshall went to the DSS facility and he saw the defendant. Restates that Mr Falana never went to the DSS office and therefore, was not denied access.

Mr Falana starts by saying that the prosecution should have confirmed the facts with their client (the DSS).

Mr Falana reminds the court that Justice Taiwo Taiwo had granted bail on Sept 24th but the DSS refused to obey.

He said he went to serve the bail papers on the DG but he was not seen while others were given audience while he sat in the reception.

Mr Falana also made the point that the prosecution had applied to the court for witnesses to be recorded behind a screen.

The request had been agreed by the Deputy Court Registrar (DCR). The application was made without the knowledge of the defence.

The prosecution had also made plans to swap the position of the dock & witness box to protect them.

The witness box is on the left side facing the judge so by moving it to the right, they can enter through the judge’s door and be behind a screen.

The set up had been dismantled by the time the judge came in.

Judge Ojukwu summoned the DCR to explain what had happened.

After listening to the DCR’s rep, Justice Ojukwu had to ask who was in charge of the court. The prosecution says they only made ‘administrative’ arrangements not judicial arrangements.

Mr Falana interjected that the application had not been done and he is appalled that the prosecution would make such arrangements without the knowledge of the defence and the Judge.

The application for adjournment was declined, a d the prosecution was asked to call the first witness.

Prosecution claim they have witnesses to show that Sowore planned to overturn a legitimately elected government. That if not that the security agencies acted “fastly” & “swiftly”, there would have been “catastrophic for a nation we all love dearly.”

Justice Ojukwu said she gave ample time for documents to be shared so the defendant has adequate time to prepare. She refers to the Constitution being the foundation while the prosecution is relying on the Administration of Criminal Justice Act (ACJA).

She rules that the prosecution should provide all the documents the defence have requested.

Meanwhile, Omoyele Sowore, convener of Revolution Now protest, and co-defendant, Olawale Bakare, charged with treasonable felony, among others, have met the bail conditions imposed on them.

Mr. Femi Falana (SAN), a human rights lawyer made this known at the Federal High Court in Abuja on Wednesday, adding that the defendants would be freed later on Wednesday.

“I have already explained to the learned prosecuting counsel that we are encumbered by the refusal of the State Security Service to allow us to prepare for the defence of the defendants.

“I had already asked my learned counsel for the prosecution, that we are confident that the defendants will be freed today (Wednesday) from the custody of the SSS having met the bail conditions imposed on them by this honourable court.

“Once they are liberated from the custody of the SSS, we will be in a position to take full instruction from them,” he said.

Recall the Federal High Court in Abuja had agreed to the request by Sowore and his co-defendant, Olawale Bakare for the variation of the conditions attached to the bail earlier granted them.

The court had on October 4 this year granted them bail on certain conditions, which they considered stringent and which they could not meet, prompting them to apply to the court for variation.

In a ruling, Justice Ijeoma Ojukwu waived the earlier requirement that one of Sowore’s deposits N50million as security and reduced the amount attached to Bakare’s bail from N50m to N30m.

Justice Ojukwu said all other conditions should remain. She said the decision to restrain the defendants from participating in rallies was in order in view of the nature of the case.

She adjourned till November 6 for the commencement of trial in the case, in which Sowore and Bakare are charged with among others, treasonable felony.

The judge in a ruling on October 4, 2019 granted Sowore bail at N100million and two sureties in the same amount, and barred him from travelling out of Abuja.

Justice Ojukwu ordered one of Sowore’s surety to deposit N50m in the account of the court as security.

She granted Bakare bail at N50m with a surety in the same amount and barred him from travelling out of his base in Osogbo, except while coming for the trial in Abuja.

The judge added that the sureties, who must be resident in Abuja, must also have landed assets worth the bail sum in Abuja, and should deposit the original title documents of the assets with the court.

Justice Ojukwu ordered that the defendants be remanded in the custody of the Department of State Service (DSS) pending when they are able to meet the bail conditions.