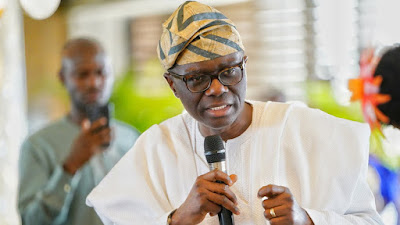 Gov. Babajide Sanwo-Olu of Lagos State on Monday urged Lagosians to support the aged and families of the men of Nigerian military who died in service.

He said that there was the need for the support, so as to improve the quality of life of the ex-service men and their families as they paid the dear prize for the unity and peaceful coexistence of Nigeria.

According to him, the Lagos State Government already has a cordial relationship with the legion and will continue to renew the relationship.


In his speech, the Lagos State Chairman, Nigerian Legion, Retired Col. Fola Akande, said that the council catered for about 16,000 widows, orphans, dependants, disabled and aged ex-service men who throng its office daily for welfare purpose.

Akande said that the launching of the Emblem/Appeal Fund marked the commencement of series of activities that would culminate in the laying of wreath at the Remembrance Arcade on Jan. 15.

He said that every Jan. 15, was set aside to remember and celebrate fallen military heroes who paid with their lives for the unity of the country.

The chairman urged the people and government to support widows, children and families of the fallen heroes by donating generously, buying and wearing the Armed Forces Remembrance Day celebration emblem.

Akande said that the donation would be used for ameliorating the sufferings of widows of ex-service men, aged and disabled ex-service men and the empowerment of dependants of the fallen heroes.

He appeal to the governor to consider the Legion’s request for approval of more patrol vehicles and motorcycles for supervision and monitoring of the Legion personnel deployed to various locations as security operatives in the state ministries, departments and agencies (MDAs).

According to him, the governor should consider engagement and employment of more Legion Commissionaires Officers as security personnel to guard all public schools in the state.