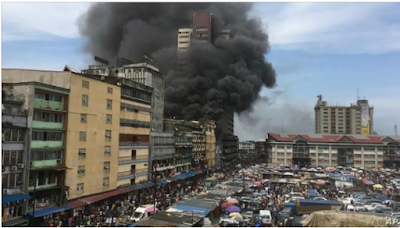 The front section of the six-storey building gutted by fire on Tuesday in Lagos Island has collapsed, killing a policeman.

According to NAN, a part of the six-storey building located at 43 Martins street, Lagos Island, collapsed around 8:30pm on Tuesday.

The incident happened as firemen were battling to contain the inferno.

A part of the burning building collapsed on the policeman while he was trying to control the surging crowd.

The fire outbreak started at 9am.

“We received call earlier this morning that there is a fire incident that involves two multistorey buildings at Martins Street and Dosumu Street in Lagos,” he said.

“Immediately we activated our emergency response plan and other stakeholders in managing emergency moved to the scene.

“We are able to locate and localise the fire but the major challenge we are having is access to major source of the fire; secondly, we discovered that they stored highly inflammable materials in the building.

“The way the building is positioned is adjacent and interlocked to the centre area, but we make use of combined team method to localise the fire which spread from one shop to the other but we are trying to put it off now.”

He appealed to Lagos citizens, especially the traders at Lagos Island markets, not to panic as there was no casualty involved in the incident.

He, however, pleaded with traders to stop putting generators and petrol inside their shops to avoid similar accidents in the area.

Mojola said Lagos State emergency team and other stakeholders were working hard in ensuring that the fire did not affect any other building in the area.