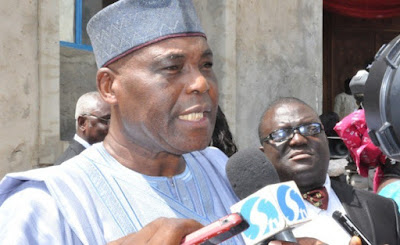 The Chairman, Daar Communications Plc, Chief Raymond Dopkesi, on Tuesday told FCT High Court Apo, that everybody treated him like a plague after his name appeared on the looters’ list released by the Ministry of Information.

Dokpesi stated this while being cross-examined by the defendants’ counsel in a suit he filed before Justice Olukayode Adeniyi, of an FCT High Apo, seeking N5 billion damages from Alhaji Lai Mohammed and the Attorney-General of the Federation (AGF) and Minister of Justice, Abubakar Malami, SAN.

He dragged the ministers to the court, claiming that they defamed his character by including his name on the treasury looters’ list.

He told the court that the Information Minister had on March 30, 2018 during a press conference portrayed him as “a corrupt and crooked person, a dishonest man and a thief”.


Dokpesi insisted that his reputation has been seriously injured, adding that he has suffered considerable distress, ridicule, as well as political analysis in the media, castigating him on the basis of the inclusion of his name as number four on the looters’ list, NAN reports.

He, therefore, demanded N5 billion in damages for libel and also urged the court to order the defendants to publish a full retraction and apology to him in all major electronic and print media outlets in country.

Dokpesi, while answering questions from counsel for the defendants, Damian Agbe, stated that he was unjustly called a looter of treasury.

“The minister (Lai Mohammed) said I was a looter. The minister clearly in his statement stated that he is releasing the list of looters.

“The word ‘alleged’ was never used in his statement. I am in the media; I am a media proprietor,” the claimant told the court.

Though he agreed with Agbe that he was facing trial for allegedly collecting N2.1 billion from the Office of the National Security Adviser (ONSA), Dokpesi declared that he had not been found guilty by any court.

“What is in the public domain is the fact that N2.1 billion was paid to an institution called Daar Investment and Holding Company Limited, operators of Africa Independent Television and Ray Power National Network FM. But not that I, Raymond Dokpesi looted the treasury,” he said.

According to him, as a result of his being listed among treasury looters, he no longer enjoyed the goodwill of his party, the Peoples Democratic Party (PDP).

He informed that the party recently released the lists of members of campaign councils for the forthcoming governorship elections in both Bayelsa and Kogi but he was rejected by the party.

“The list of members of campaign councils for Bayelsa and Kogi where I was rejected was released.

“Everybody is treating me like a plague. I was rejected. There are members of national campaign council of leaders nationwide and Raymond Dokpesi is conspicuously absent.”

He told the court that though he held no position in the opposition party, I was a leader a stakeholder in the PDP.

Dokpesi added that all his witnesses who came to testify for him in the case are political associates who he knew for a long period of time.

He further stated that he had suffered a lot of setbacks and discrimination by the society due to his inclusion on the looters’ list.

Meanwhile, Justice Adeniyi adjourned the case until Jan. 16, 2020 for defence.