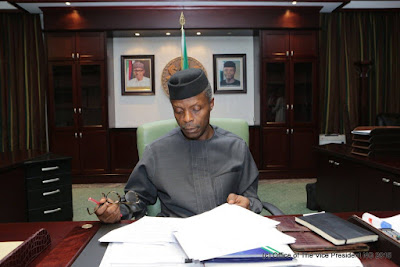 It would not have been a surprise if after some roles were moved away from his schedule, the Vice President is seen slowing down and doing less. But that is not the story of Prof. Yemi Osinbajo, SAN, Nigeria’s current number 2 man. It would seem that if all you asked this pastor turned politician to do is to sweep the Presidential Villa, he will do it with so much diligence that it would become talk of the town.

Indeed, Osinbajo himself is known to many as an advocate of excellence in speech and conduct. For instance, he said only recently that the world is in search of men and women of excellence, integrity and hard work. This was last week at the Convocation of Baze University in Abuja where he was Special Guest of Honour.

Indeed, this is a man that walks the talk and practices what he preaches. A dedicated patriot, whose commitment to public service and national causes is never in doubt, Prof. Osinbajo embodies these three crucial attributes: excellence, integrity and hard work.

Since he answered the call to national assignment to become President Buhari’s running mate before the elections in May 2015 and till date, the Vice President has continued to show why many Nigerians believe that he is the best Vice President Nigeria has ever had.


A pointer to the VP’s commitment can be seen in recent times, particularly in the month of October, which marked Nigeria’s 59th Independence anniversary. Not that October was any different from previous months in his busy work schedules in a calendar year. But his very busy itinerary of activities in October, again, was just an affirmation that this VP is indeed a hardworking man and totally devoted, alongside President Muhammadu Buhari, towards improving the welfare of the common man and making Nigeria better.

On Independence Day, October 1, the Vice President was with President Buhari at the 59th Independence Day Change of Guards Event in the morning, which was followed by a Dinner and Gala night on October 2. At the Dinner and Gala night at the State House Banquet Hall, Abuja, Osinbajo mesmerised the crowd with a speech that will live long in the memory, chronicling the famous Nigerian spirit of creativity and enterprise in vibrant colours; as he spoke eloquently about its culture, Nollywood movie, music, dance, fashion, sporting achievements and heroes, and of course the ‘Nigerian swag’.

On Friday, October 5, the VP was in Lagos as special guest speaker at the 59th Independence Anniversary Lecture at the Island Club, Lagos, where he advocated for State to have more powers, adding that devolution of more power to States enables them to control more of their resources. The Vice President, who titled his lecture “the whole is only as great as the sum of its parts,” said Nigeria’s population and diverse ethnic groups has necessitated that states in the country be strengthened to enable them contribute more to national productivity and development. Prof. Osinbajo stated that this can be achieved with “stronger, more autonomous States that are able to generate and control more of their resources.” He also advocated for States & community police forces, correctional facilities, special courts

According to the Vice President, the current administration of President Muhammadu Buhari is ensuring that states collaborate more with the Federal Government on different initiatives to improve visionary governance in the country.

A day later on Saturday, Prof. Osinbajo attended at the UAE-Nigeria Cultural and Arts Exhibition in Ikoyi, Lagos, where he spoke about the significance of collaboration between the two countries in the areas of arts and culture and tourism.,

Earlier that week, the VP also received at the Presidential Villa, Abuja, delegations from the Nigeria Centre for Disease Control and the Trade Union Congress.

In the meeting with the TUC, the VP reiterated the Buhari administration’s commitment to improve the welfare of workers, stating that Government will honestly and transparently resolve the request by labour for a salary increase for other levels of workers not affected in the implementation of the new national minimum wage.

When a high-powered delegation from the International Criminal Court (ICC) arrived Nigeria, led by its Prosecutor, Mrs. Fatou Bensouda, the Vice President was on hand to receive them.

At the meeting at the Presidential Villa, Abuja, Osinbajo emphasized that Nigeria is fully cooperating with the International Criminal Court (ICC) preliminary examination into issues related to insurgency in the North East to ensure the process is forthrightly concluded.

During the month of October, the Vice President also chaired the National Council on Privatization, met with British Missionary and received delegations from the International Business Machine, United Nations (UN), and from US-based Bridgeway Community Church, led by its founder and senior pastor, Dr. David Anderson; alongside a delegation from the Nigerians in Diaspora Commission.

““The future for society, in my view, relies on our ability to build bridges and to ensure that those bridges are firm and we can walk across it and interact with each other,” he stated during the latter meeting.

The VP not only spoke on building bridges across religions and ethnicities, he was deepening conversation on human capital development, and nation building wherever he went.

So much so that when the visited Nasarawa on October 17th, and was taken round the Nigerian Farmers Group and Cooperative Society (NFGCS) Farms Centre where ex-militant from Delta state was developing 3,000 hectares farm for crop & livestock production, the Vice President noted that Tedheke’s story was “a true Nigerian story of hope, honesty and unity.”

The NFGCS farm, which was founded by Tedheke, started with three hectares and N1.5m in 2017, is now worth about a billion naira, with over 300 people from different states employed.

Saturday, October 26 was another busy day for the VP as he participated in three events in three different states. That morning, VP also delivered the Convocation Lecture at Baze University, Abuja, where he harped on the importance of trustworthiness and integrity. In the afternoon, he represented President Buhari in Kogi State to flag off the APC Gubernatorial campaign, and in the evening, he was at the University of Lagos Alumni Award Dinner was he was honoured with a Golden Jubilee Recognition Award.

Between the 21st and 31st of October, the VP presided over the National Economic Council (NEC) and Federal Executive Council (FEC) in Abuja, attended the National Festival of Arts and Culture in Edo State, inter-faith religious dialogue on promoting religious tolerance and acceptance organized by the UAE embassy, and the NDIC 30th Anniversary Lecture.

Prof, Osinbajo also received the Speaker of Egyptian House of Representatives, Dr. Ali Abdel-Aal Sayed Hamad. During the meeting, Nigeria and Egyot agreed that a concerted action by the international community is needed to tackle terrorism in the Sahel region, as well as the challenges posed by Boko Haram and ISWAP in Africa.

At another high-level meeting at the Presidential Villa, Abuja, where the VP received the Vietnamese delegation led by its Deputy Prime Minister, Mr. Vuong Dinh Hue, Nigeria and Vietnam agreed on the establishment of a joint commission on trade and strengthening the bilateral ties between the two countries.

He also attended the Conferment Ceremony of Chief Kessington Adebutu as ‘‘Odole–Oodua’’ in Osun State, the10th Anniversary of the National Prayer Breakfast Meeting in Abuja, and the three-day Conference and Retreat for Strategic Leadership Officers of the Nigeria Police Force. At the Conference, he urged the Police to uphold justice and fairness, noting that Nigerians want a police Force they can be proud of.

Similarly, the VP attended the 60th anniversary celebration of Africa’s first television station, the Western Nigeria Television, in Ibadan (which commenced operations on October 31, 1959), as well as the commissioning of Liberty TV and Radio digital studios in Abuja.

Noteworthy also in October the VP received the Presidential Enabling Business Environment Council (PEBEC) 2019 Compliance Report. Through PEBEC’s efforts, chaired by the VP, the World Bank’s 2020 Doing Business Index (DBI) ranked Nigeria 131 out of 190 countries, up 15 places from 146th position last year. The report also named Nigeria one of the top 10 most improved economies in the world. Nigeria is one of only two African countries to make this highly prestigious list.