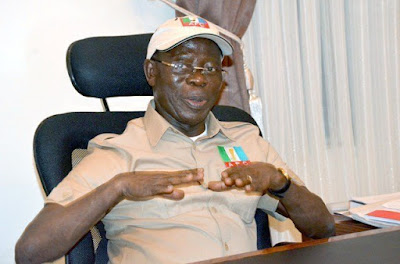 Adams Oshiomhole, national chairman of the All Progressives Congress (APC), has blamed Philip Shaibu, deputy governor of Edo state, for the attack on Godwin Obaseki, the governor, and Rilwan Akiolu, oba of Lagos.

The incident occurred at Oshiomhole’s country home in Iyamho, Edo, on Saturday.

Obaseki, Akiolu and Aderemi Makanjuola, chancellor of Edo State University, had attended the maiden convocation ceremony of the Edo University.

In a statement, Simon Ebegbulem, media aide of Oshiomhole, said tension in the community started when the deputy governor visited on Friday.

“I want to state that the people who unleashed mayhem on vehicles were the thugs who invaded the university community on the orders of the deputy governor of the state, Philip Shaibu,” he said.

“The tension in the community started last Friday when the deputy governor imported thugs into the community with a view to intimidate political opponents.

“In fact the Central Bank governor who delivered a lecture at the convocation ceremony that Friday insisted that the thugs who were disturbing the public must stop the noise-making before he could commence his lecture. Security agents helped to ensure peace before the event started. As a matter of fact, Comrade Oshiomhole left the event through the back so as to avoid being attacked by the thugs who laid siege at the entrance gate of the university.

“Then today (Saturday) which was the main event, the governor, the national chairman of APC, Comrade Oshiomhole and other guests were already in the hall when at about 11:30am, the deputy governor stormed the University with over 200 Okada riders and thugs.

“Security operatives accosted them at the gate and refused them entrance. The thugs started threatening the security operatives who insisted the deputy governor can enter the venue but they will not allow the thugs to gain access.”

The chairman’s aide said his principal has apologised to the chancellor and the oba of Lagos.

‘UNFORTUNATE WE AREN’T SAFE IN OUR CHAIRMAN’S HOUSE’

Reacting to the incident, the governor said it is sad that they could not feel safe in the home of Oshiomhole.

“It is very unfortunate that we can’t feel safe in the house of our national chairman,” Crusoe Osagie, media aide of Obaseki, quoted the governor as saying when he spoke with reporters after the incident.

“I am not sure that if I visit the Chairman of the People’s Democratic Party (PDP) that they will attack me the way they did in the house of the APC National Chairman.