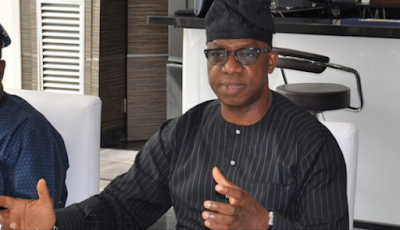 The National Industrial Court of Nigeria (NICN) has been asked to set aside Governor Dapo Abiodun’s appointment of new members of the Ogun State Judicial Service Commission (OSJSC).

The application was made by a former member of the commission, Abayomi Omoyinmi.

The claimant, it was gathered, was appointed a member of the Commission through a letter by former Governor Ibikunle Amosun on February 2012, for a five-year tenure “as stipulated in the Constitution” and same was renewed by another letter dated January 30, 2018 pursuant to Section 199 (1) (C) of same law and to end January 2023.

However, the commission was reportedly dissolved by Gov Abiodun after his inauguration.


Consequently, Omoyinmi, in a Motion on Notice brought pursuant to Order 22 of the NICN Civil Procedure Rules in Suit no: NICN/AB/09/2019 prayed the court for two orders:

“An order setting aside the appointments, constitution and inauguration of the new members performed by the governor and State House of Assembly, and second and fourth respondents respectively, in Suit no NICN/AB/09/2019, during pendency of the application for Interlocutary Injunction before the court” and

The Ogun State Government and Ogun State Attorney General and Commissioner for Justice are first and third respondents respectively.

In his affidavit in support of the motion, the claimant averred that he was aware that despite service of the Originating Summons and application for Interlocutory injunction, the defendants have not filed any counter-affidavit.

According to Omoyinmi, he heard through the media on October 31, that despite pendency of the suit, the second defendant, Gov Dapo Abiodun, announced the appointment of new members for the Commission.

He alleged that the second respondent, in spite of service of applications before the court, hurriedly sent names of new appointees to the fourth defendants for screening and confirmation.

He said “while the Originating Summons was to be heard Tuesday, November 5, the second defendant hurriedly inaugurated the new appointees on Monday, November 4.”

He explained that the OSJSC is a statutory commission established by the 1999 Constitution, as amended, and that tenure of members is as fixed by same Constitution.

He claimed that “in a manner shrouded in secrecy, the defendants claimed to have dissolved all statutory and non statutory boards and commissions.”

Omoyinmi further stated that the fourth defendant premised its resolution on the alleged claims that members of boards and statutory Commissions had received severance allowances from former government of Ibikunle Amosun without verifying the truthfulness of such position.