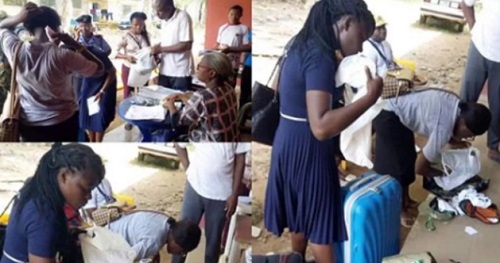 Several Nigerians have voiced their opinion about the decision of the National Youth Service Corps, Ebonyi State chapter, to de-kit two female corps members who had refused to wear the official pairs of white shorts and khaki trousers.

Nigerians have since taken to the social media to express their views on the matter.

See some of the reactions:

So a lady was kicked out of Nysc Camp because she refuse to wear trousers, it's against her religion. This remind me of the one that happened in my camp. She was the only one wearing skirt. Right there on the parade ground. She stepped on her skirt and fell flat on her face. 🤣
— ✨President Aisha✨🌚 (@PresidentAisha) November 10, 2019

If Muslim ladies are allowed to wear Hijab in NYSC camps for religious reasons, why won't some Christian ladies be allowed to wear skirt for same reasons? pic.twitter.com/aQz7XT2PKv
— Kelvin Odanz (@MrOdanz) November 10, 2019


The same arguments were used when Amasa Firdau insisted on wearing Hijab underneath her wig. All this is about traditions that have been respected for decades.

But Firdaus won, no? She altered the tradition. The same logic should be used here. Religious tolerance is the fulcrum.
— Kelvin Odanz (@MrOdanz) November 10, 2019


Well if Muslims are allowed to wear hijab which is solely based on religious beliefs then I see no reason why Christian's can't wear skirts during NYSC.

After all some time ago a Muslim pushed for hijab while being called to Bar and it's a thing today.
— M Abba (@M_Abba_) November 10, 2019