No African country is silent on racism, xenophobia — UNGA President 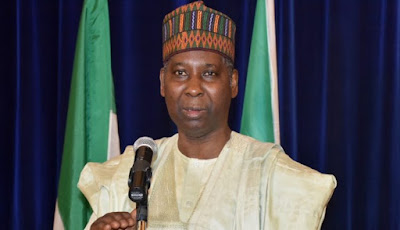 Prof. Tijjani Muhammad-Bande, the President of the UN General Assembly (UNGA) says no African country is silent on racism and xenophobia, as all nations on the continent condemned such actions.

He said this in a special interview with News Agency of Nigeria (NAN) in Abuja, during his first official visit to the country as President of the General Assembly.

He affirmed that racism, xenophobia and resurgent nationalism and tendencies toward protectionism in Africa and other parts of the world were threats to multilateralism.

According to him, no country or community is self sufficient, hence the need to strife for peace, and unity, and going forward requires collective efforts toward addressing the challenges and concerns of the continent.


He noted that “fortunately, the issue between South Africa and other African countries has been successfully resolved, with the presidents of South Africa and Nigeria urging citizens to embrace peace.

“All African countries condemned racism, no African country is silent on racism, after all, the struggle against apartheid was not a South African struggle.

“It was a struggle of Africans and its friends and those who believe in humanity.

“The situation surrounding South Africa has already been resolved, it is not even an issue between South Africa and Nigeria, it involves other African countries and the mistake in that situation has been well understood and resolved.

“You can see after the visit of President Muhammadu Buhari to South Africa the whole idea that going forward, it is simply and collectively to address common concerns on the continent.”

On the issue of irregular migration, which is a challenge in the West-African sub-region, Muhammad-Bande said that the UN adopted the Global Compact on Migration in December 2018 in Marrakech, Morroco.

He explained that the compact was endorsed by the UN General Assembly to cover all dimensions of migration and to ensure that migration was done in a safe and regular manner.

He added that the first positive development contained in the document was recognising migration as a positive thing, noting however that the act could have negative results when carried out irregularly and through dangerous and deadly routes.

The UNGA president, who noted that the adoption of the Global Compact on Migration was a hard negotiation for stakeholders, added that it would be an opportunity to see how well it would be implemented.

He said that the document would be reviewed after four years to assess the successes and challenges.

He explained that “the fact that there is a compact is because there is a problem and the way to deal with a problem is to collectively see whether there is a way to address it.”

The UNGA President arrived in Abuja on Nov. 21 on a four-day official visit.