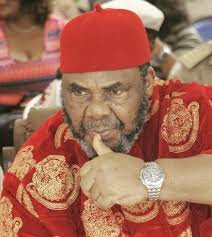 Controversial Nigerian blogger, Sugabelly known for her unconventional views on issues is in the news again. This time around, the illustrator stirred the hornets’ nest when she averred that Pete Edochie, veteran Nollywood actor, is a  “really bad actor”.

Recall that Sugabelly first made the headlines in 2015, after she celebrated the death of Abubakar Audu, the former governorship candidate of Kogi state.

Surprisingly, the outspoken illustrator took to her Twitter page to question the acting flexibility of the 72-year-old movie star, saying that “he has been playing the same role all his life”.

“Pete Edochie is a really bad actor. He’s been playing the same role his entire life,” she wrote.


“Acting isn’t quoting proverbs. But Nigerians live and die by seniority so the older he gets, the less anybody is able to point this glaring elephant in the room out.”

She also extended her criticism to Joke Silva, who she said “overacts” in her movies.

“Joke Silva is a pretty good actress but she overacts a lot. Not through her movements but through her voice. She always sounds as if she’s reciting Shakespeare when she’s meant to be chatting with her adult child at breakfast. Also, she doesn’t have much variation in roles,” she wrote.

As expected her statements has triggered a myriad of backlashes on Twitter.

“Sugabelly said Pete Edochie is a bad actor.. wait, are u expecting him to act like Aki n paw paw. Everyone has their role in the movie industry just like Morgan Freeman, Jackie Chan and others.. Just f offf and stop creating unnecessary clout!,” said a user