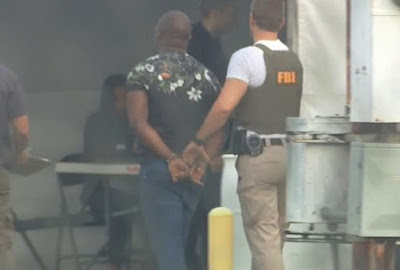 He was docked on November 19 before the U.S. Magistrate Judge Janet F. King. A federal grand jury indicted Mgbodile on November 6, 2019.

Mgbodile was docked the same day that Air Peace chairman, Allen Onyema was also accused of money laundering and bank fraud by the Department of Justice, U.S. Attorney’s Office, Northern District of Georgia.

One of Mgbodile’s victims, a woman lost $6.5million to him via romance scam, while he failed to pull through a Business E-mail Compromise Scam of $350,000.


“Online romance scams and business email compromise frauds have increasingly become the method of choice for transnational fraudsters targeting U.S. residents and companies,” said U.S. Attorney Byung J. “BJay” Pak, who made the announcement of Mgbodile’s indictment and arraignment on Wednesday in Atlanta.

“In this case, a single victim allegedly lost millions. This is a stark reminder that users of online dating websites should be aware of such scams and exercise extreme caution if asked for money by anyone online or over the phone.”

“This investigation and subsequent indictment demonstrates the commitment the Secret Service and our partners have in aggressively pursuing those who commit online fraud scams,” said Malcolm D. Wiley, Sr., Acting Special Agent in Charge of the United States Secret Service, Atlanta Field Office. “This case serves as a reminder to all, particularly during the holiday season, to ensure protocols related to cyber hygiene are observed.”

According to U.S. Attorney Pak, the charges, and other information presented in court: Mgbodile was allegedly involved in two fraudulent schemes, a romance scam that defrauded a Virginia woman out of more than $6.5 million, and a business email compromise (“BEC”) scam in which Mgbodile and others attempted to defraud a Georgia company of nearly $350,000.

Excerpts of the Press statement by Pak

Romance scams are a type of online fraud in which victims are targeted by individuals posing as potential paramours. The fraudsters create fake online dating profiles (often with photographs of attractive men or women) and use these fake personas to express a romantic interest in the victims in order to trick them into sending money to them or their co-conspirators under false pretenses. Romance scams frequently target vulnerable individuals who possess significant financial assets, such as retired widows or widowers.

The indictment alleges that at the end of November 2017 a Virginia woman, who had a sizable trust, met a person through an online site. She was soon convinced that she was in a romantic relationship with the defendant who she had come to know as “Jimmy Deere.” Over the next month, the victim communicated via email with Deere, whom she believed had fallen for her. Deere said he wanted to start a life with her and was excited to live with her, but first had to resolve an investment opportunity—an opportunity that was totally fraudulent and fictitious.

Deere told the victim that he was a fund manager and he was on the verge of receiving a sizeable commission (“the funds”) for services provided to an unnamed client. He explained to the victim that he needed her to be his “representative partner” and have the funds deposited into the victim’s bank account to avoid an alleged conflict of interest.

In January and February 2018, after luring the victim, Deere and conspirators started requesting via email that she pay various “fees” and “taxes” so that the funds could be released. Between approximately January 2, 2018 and February 12, 2018, and in response to representations made by Deere and others regarding the funds, the victim made approximately twenty-five wire transfers totalling more than $6.5 million from the victim’s trust account into various bank accounts. At least $1.1 million was wired to business bank accounts controlled by Mgbodile. These bank accounts were for fake companies that did not have physical premises, earn legitimate income, or pay wages to employees. After the fraudulent funds hit the accounts controlled by Mgbodile, he allegedly wired the funds to other accounts controlled by Mgbodile, or overseas accounts in China and the Middle East.