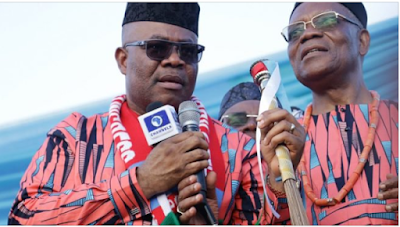 A non-governmental organisation, the Legal Defence and Assistance Project (LEDAP) has filed a suit before a Federal High Court, Abuja challenging the powers of the Minister of Niger Delta Affairs, Godswill Akpabio, to constitute an interim management committee to run the affairs of the Niger Delta Development Commission NDDC.

The suit was as a result of Mr Akpabio’s address to journalists in Abuja last week where he stated that the interim committee was to prepare the ground for the new board who will supervise the forensic audit which the President had ordered some weeks ago.

According to him, “we are not against forensic audit of NDDC as directed by President Muhammadu Buhari, but, let the process be credible.”

The announcement of an interim management team had sparked outrage in the Niger Delta states as many see the move as a way to scuttle the development projects of the NDDC. However, LEDAP is the first non-governmental organisation to challenge Akpabio in court.


The co-plaintiffs in the suit are some indigenes of the Niger Delta area, including Iruo Onoruvwe, Anatole Osuji, and Walter Abere, while other defendants aside the Minister and the NDDC are Dr Gbene Joi Nunieh, Dr Cairo Ojougboh, and Chief Ibanga Basset Etang.

In the said suit, filed by the Executive Director of LEDAP, Chino Obiagwu SAN, the plaintiffs are seeking the following reliefs:

A declaration that the purported appointment by Mr Akpabio of three-man interim management for the NDDC is contrary to sections 2, 10, and 12 of the NDDC Act 6 2000(as amended)

A declaration that the purported appointment of the third defendant as the Managing Director of NDDC, the fourth as Executive Director, Projects, and the fifth defendant as Executive Director, Finance and Administration of the Agency are contrary to the provisions of section 12(1)c of the NDCC Act as amended, which provides that the Managing Director and two executive directors of the NDDC shall be appointed by the President, Commander-in-chief of the Armed Forces and confirmed by the Senate in consultation with the House of Representatives.

A declaration that by virtue of Section 12(2) of the NDDC Act, the Managing Director of the second defendant performs his functions under the general direction of the board of the Agency.

A declaration that the Minister cannot validly appoint the 3rd-5th defendants as acting Managing Director; and Executive Directors of the NDDC while the list of nominated members of board of the second defendant submitted by the President, pursuant to sections 2, 10, and 12 of the NDDC Act 2000 to the National Assembly is pending the approval of the Senate.

An order restraining the NDDC and its management from handing over, and, or permitting the 3rd-5th defendants to assume the office of the Managing Director and Executive Directors of the NDDC.

An order restraining the Minister, by himself or anybody whatsoever from interfering in the affairs of the NDDC in a manner inconsistent with the provisions of the NDDC Act.