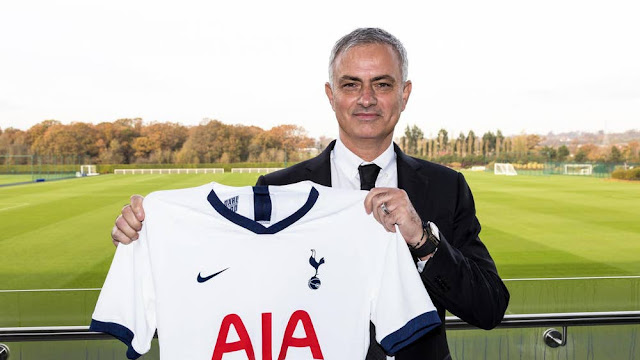 The former Chelsea, Real Madrid and Manchester United manager were announced as the new boss at White Hart Lane hours after the Argentine was dismissed on Tuesday evening.

“I couldn’t be happier and look forward to the challenge,” Mourinho told Tottenham’s official website.


“What can I promise? Passion, real passion. Passion for my job, but also a passion for my club, that’s the way I have been all my career.”

The 56-year-old, who had been out of work since leaving United last December, signed a contract until the end of the 2022-23 season after Spurs acted to halt their slide down the table.

The club reached the Champions League final last season but are languishing in 14th spot in the Premier League after picking up just three wins from 12 games. They are 11 points off the top four positions which allow qualification to European club football’s top competition.

“I want to try, obviously, everything to bring happiness to everyone who loves the club,” added the new manager, who has won domestic league titles in Portugal, England, Italy and Spain.

Mourinho was due to take training on Wednesday before his first press conference on Thursday. His first game in charge is at West Ham on Saturday.

He also won three Premier League titles over two spells in charge of Chelsea and returned to England to manage Manchester United in 2016, where he won the Europa League and the League Cup.

“In Jose we have one of the most successful managers in football,” said Spurs chairman Daniel Levy. “He has a wealth of experience, can inspire teams and is a great tactician.

“He has won honours at every club he has coached. We believe he will bring energy and belief to the dressing room.”

Mourinho was sacked by United last December and has been without a club since, most recently working as a TV pundit.

Despite his troubles in the latter stages of his tenure at Old Trafford he remains a big name but is a divisive figure and there will be questions over whether his pragmatic style can mesh with Tottenham’s tradition of attacking the football.

Although he failed to win a trophy, Tottenham made a dramatic run to the European Cup final for the first time in their history in June, losing 2-0 to Liverpool in Madrid.

But that masked a worrying dip in domestic form in the second half of last season and Pochettino was unable to reverse the slide in this campaign.

They were also bundled out of the League Cup by fourth-tier Colchester United and suffered an embarrassing 7-2 defeat at home to Bayern Munich in the Champions League.

“The same voice after six years starts to wear a little thin, a new man can find another 10 percent, they will find a spring in their step for Jose’s first game,” he said.

Mourinho has a tough task on his hands. No team with as low a tally as Spurs have after 12 games — 14 points — has ever gone on to record a top-four finish.

– Tributes –
Pochettino, operating on a tight budget in comparison with his rivals, nurtured a squad of young players to become household names including Harry Kane, Dele Alli and Christian Eriksen.

A series of Spurs players paid warm tribute to their departing manager.

Tottenham and England forward Kane tweeted: “Gaffer. I’ll be forever thankful to you for helping me achieve my dreams.”

South Korean forward Son Heung-min said in an Instagram post that “words are powerless to express my gratitude”.

The Tottenham Hotspur Supporters’ Trust released a statement expressing “concerns” and seeking clarity over how the new boss and the board would work together.

The group asked: “Is the manager solely accountable? How much has the board’s line on wages and transfers contributed to player unrest and disaffection?”