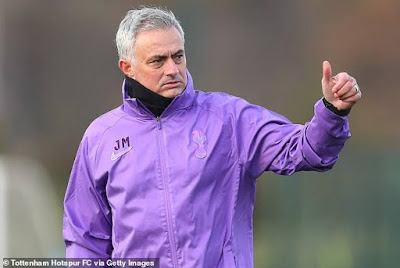 Jose Mourinho said he was “happy” with his players after delivering Tottenham’s first away win in the Premier League since January in his first game in charge with a 3-2 win at West Ham on Saturday.

Son Heung-min, Lucas Moura and Harry Kane scored the goals as Mourinho made an instant impact after replacing the sacked Mauricio Pochettino on Wednesday.

Spurs were cruising at 3-0 up and although Michail Antonio and Angelo Ogbonna scored for the home side, it was too little too late.

The win rockets Spurs up the league table to sixth, but still eight points behind champions Manchester City in fourth spot, having played a game more.


“I was really happy before we conceded the two goals, we were playing well, bringing to the game things we had tried in training,” Mourinho told BT Sport. “And we had the ball to make it 4-0 and kill the game.

“We are lucky I have so many years in the Premier League so I told the players at half-time ‘even if we are 3-0 in the 85th minute the game will still be open’.

“But there were also many factors. The emotions of losing the previous manager, people coming back from national teams and fatigue in the last 20 minutes.

“The most important thing was to win, no matter how. The boys are happy and that’s what I really wanted.”

Spurs midfielder Dele Alli said, “It’s been a very tough week for us emotionally. We’ve spent a long time with Pochettino and we were very sad but we had a job to do. We had to go out for the fans and try and stay as positive as we can.”

“We have to carry on momentum and keep winning, we need to start that from now,” he added. “There is still a lot to work on and we need to improve from now on.”