Most bad roads in Nigeria belong to states – FG 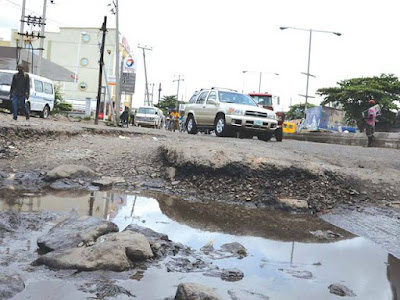 The Federal Government on Wednesday insisted that most bad roads in the country are within the purview of states.

It said not every bad road is its responsibility.

Besides, the Federal Government said it was funding the Federal Ministry of Works to deliver on road repairs.

According to the Minister of Finance, Budget and National Planning, Mrs Zainab Ahmed, about N650 billion had been released for capital projects in the 2019 budget.

The figure, she said, surpassed the N600 billion President Muhammadu Buhari said should be released as of October.


Mrs Ahmed said additional N250 billion would be released by December to bring total releases for capital projects this year to N900 billion.

She was responding to the claim by Minister of Works and Housing, Mr Babatunde Fashola, that poor funding was the reason road projects were not executed at a faster pace.

The minister spoke after the Federal Executive Council (FEC) meeting.

She recalled that the government issued several Sukuk Bonds aimed at generating money to fund road projects, adding that not all roads were Federal Government roads.

She noted that the majority of bad roads belonged to the state governments.

Mrs. Ahmed said: “Works is always on the priority list; housing is always funded. Same is transportation and power, though we have revenue challenges.

“It allows me to state that the Minister of Works and Housing has a proposed budget of N247 billion for the year 2020 and the greatest component of this budget is the fixing of Nigerian roads.

“Our fiscal space is tight, resources are limited because revenues are on the performing but at the time we have resources, funds to release, the highest proportion goes to Power, Transport, World and Housing. Also, we have introduced some measures that have seen private sector participants getting involved in road construction.

“One of these measures is the Road Infrastructure Task Credit Scheme that Mr President approved by Executive Order early this year so far we have 17 companies that are carrying out 19 roads across the six geo-political zones.

“I also want to remind you that for the past two years, we have issued Sukuku bonds. In 2017, it was for the construction of 25 roads. In 2018, 23 roads and there is also another one that is being processed.

“Majority of the roads in the country are within the purview and responsibility of States as well as local governments.

“Have we done enough? No, not yet, that is why we are trying to do more including raising special funds to make sure that roads and such other infrastructure are being addressed.”

According to her, FEC approved for Nigeria to subscribe additional 3,230 shares worth $50.637million in the International Bank for Reconstruction and Development (IBRD) of the World Bank.

She said Nigeria had a share capital of 1,687 shares at the IBRD.

“This additional subscription to the Bretton Woods institution by Nigeria is not just desirable but necessary. It will strengthen the country’s position and enhance our voice in the global financial architecture,” she said.

FEC approved a contract of N1.7billion for the construction of a jetty in Bonny Island in Rivers State.

Besides, it endorsed a bill for the establishment of a Metallurgical Training Institute in Onotsha, Anambra State.

Minister of State for Transportation, Senator Gbemi Saraki said yesterday: “The Ministry of Transportation presented a memo for the approval of the award of contract of Jetty at Bonny Island of River State. The approval was given.

“Some years ago, we had a jetty at the Bonny Island but it collapsed and now creating huge problem for top boats and pilot age. The pilot land is in Bonny so boats used to come from Port Harcourt to pick up the pilots.

“Today, the Council granted approval in favour of Messrs Due Projects Ltd for N1.7 billion and it will be completed in 15 months.”

Minister of Mines and Steel Development, represented at the briefing by the Minister of Information and Culture, Alhaji Lai Mohammed, said FEC also approved a draft of Executive Bill to be sent to the National Assembly for legal framework for the National Metallurgical Training Institute, Onitsha, Anambra State.

According to him, another memo from the ministry was for an approval for the ratification of the Statute of African Minerals Development Center.