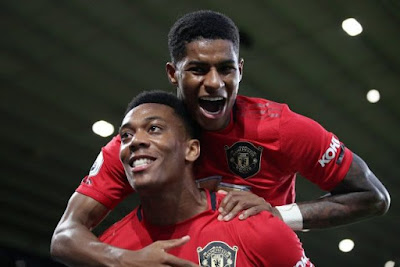 Rashford, who turned 22 on Thursday, scored twice in United’s League Cup victory win over Chelsea in midweek including a stunning free-kick that took his tally to four goals in his past three starts for the club.

His purple patch has coincided with the return of Anthony Martial, who shrugged off an eight-week injury layoff to dismantle the Norwich City defence in United’s 3-1 Premier League victory at Carrow Road last weekend.

“Since Anthony has come back, Marcus has flourished.


“He’s probably happier facing goal and being direct, driving at people, taking players on rather than being a target man with his back to goal.

But he’s only just turned 22 and he wants to master all the skills.

“I’m sure we will see more of him up front as a (number) nine in a two with Anthony, in a three like he did at Norwich or out wide as he did at Chelsea,” Solskjaer told reporters ahead of United’s league trip to Bournemouth on Saturday.

Academy graduate Scott McTominay has been equally influential in the midfield, having started all 10 of United’s league games this season and cemented his first-team status under Solskjaer.

“He’s a leader, he’s a Manchester United boy and you can tell he used to be a striker with the goal he scored against Norwich on the half-turn.

Rashford, Harry Maguire and Victor Lindelof will face late fitness tests ahead of the visit to Bournemouth after picking up knocks against Chelsea.

Paul Pogba, Luke Shaw, Nemanja Matic and Axel Tuanzebe are still on the sidelines and unlikely to be fit before the international break.