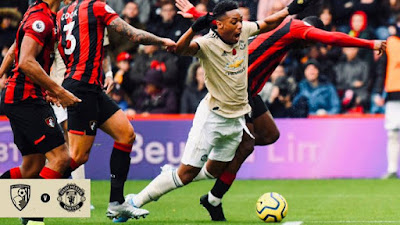 Manchester United’s mini-revival came to a crashing halt as Josh King’s strike on the stroke of half-time earned Bournemouth a 1-0 win in treacherous weather conditions on England’s south coast.

Ole Gunnar Solskjaer’s men had not won away from home since March until 10 days ago, but three consecutive wins on the road at Partizan Belgrade, Norwich and Chelsea to book a place in the League Cup quarter-finals in midweek hinted at a turning point for the Norwegian.

Instead, the failings that have characterised their season were back in evidence as a lack of goal threat and one moment of slack defending inflicted a fourth Premier League defeat in 11 games.

The visitors had started the brighter as both sides struggled to cope in the howling wind and rain.

Bournemouth struck their decisive blow just before the break when King, who started his career in England at United after being recommended to Alex Ferguson by Solskjaer, came back to haunt his former employers.

The Norwegian acrobatically lifted the ball beyond Victor Lindelof and bamboozled Aaron Wan-Bissaka before firing past David de Gea.

United enjoyed plenty of possession in the second period to try and find a route back into the game, but even with Martial back to partner Marcus Rashford in attack, they lacked a cutting edge.

Andreas Pereira tested Bournemouth goalkeeper Aaron Ramsdale with a dipping effort from the edge of the area, but it was not until Solskjaer threw on two teenagers in Mason Greenwood and Brandon Williams in the final 10 minutes that the visitors really ramped up the pressure.

Greenwood came closest to an equaliser when he hit the post with his first touch before Scott McTominay’s shot was too close to Ramsdale, who collected at the second attempt.

Bournemouth held out for a third consecutive clean sheet and just their third victory over United in their history to move above the Red Devils into sixth in the Premier League table.