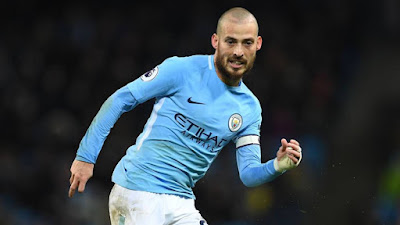 The 33-year-old Spanish attacking midfielder in his last season with the club suffered a muscular injury towards the end of the first half of Saturday’s 2-1 win over Southampton.

Guardiola, whose side trail Liverpool by six points in the table, disclosed no more about the nature of the injury but it normally entails an absence of just under two weeks.

“David Silva was injured,” said Guardiola. “Five minutes before the first half ended he told me he had a muscular problem.’

Guardiola, whose side also faces a Champions League clash with Italian outfit Atalanta on Wednesday, admitted Liverpool’s home record of not having lost at Anfield since January 2017 was a daunting prospect.

Liverpool has also not been beaten in the league since their loss at the Etihad last January and has dropped just two points this term — a 1-1 draw with City’s neighbours Manchester United.

“How many centuries and they don’t lose at Anfield? We will see,” he joked.

“Now we go to Italy and when we come back we go to Anfield. Many things are going to happen and there are a lot of games to play,” he added, denying the match would be pivotal as to who wins the title

Guardiola also ruled out taking Atalanta for granted and putting out a second-string team for the game at the San Siro.

Victory would secure City a place in the knockout stages.

“Do you think we can prioritise four titles in one season if we prioritise games?” said Guardiola.

“We’re going to play with the best team possible to win at Atalanta and after we go to Anfield.

“The best way to go to Anfield is to play a good game against Atalanta, who have been fighting with the top clubs in Italy for the last two or three seasons.”